The Warner Residence is the home of Kenny's girlfriend Tammy Warner that appeared in the Season Thirteen episode "The Ring".

Not much is known about the exterior of the house as it was never shown.

The interior of the house has a dining room with a large wooden table in the center as well as a living room with a long brown sofa. Despite Tammy's family being described as poorer than Kenny's, her home appears a lot less messy and worn out than Kenny's. 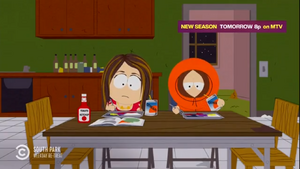 The Kitchen
Add a photo to this gallery
Retrieved from "https://southpark.fandom.com/wiki/Warner_Residence?oldid=430450"
Community content is available under CC-BY-SA unless otherwise noted.