For other uses, see Vladimir (Disambiguation).

Vladimir is a male 4th grader who first appears in the Season Twelve episode, "The Ungroundable". He is in the South Park Vampire Society.

In "The Ungroundable", he is seen with Mike Makowski, Annie Bartlett, Larry, and other vampire kids in the school gymnasium. He decides that he's going to give himself a vampire name, Vladimir, but Mike tells him he can't because it's too close to his own name, Vampir.

He is later seen in the woods at the ceremony to induct Butters into the Vampire Society as a new vampire. Vladimir, Annie, Mike, Larry, and several other vampires take Butters to Hot Topic and outfit him with a new look.

In "Butterballs", he, Ryan Ellis, and other vampire kids make a cameo appearance during the Make Bullying Kill Itself music video. He and Annie Bartlett are seen holding a sign saying "Bullying is so 2000-late."

He was later seen in "Goth Kids 3: Dawn of the Posers" at the noon meeting for the South Park Vampire Society. He sat in the front row, in front of Larry. He is accused by the Black Vampire of being an emo.

He and other vampires in the Vampire Society make a brief appearance during the "Black Friday" trilogy, where they are seen throughout the episodes as part of Stan Marsh's army to fight for PlayStation 4 systems.

Vladimir wears black pants, black shoes, a black sweater with bones on the sleeves and a ribcage on the back, a grey shirt with a stitched-on red skull on the front, and a silver necklace with a skull on it. He wears black eyeliner and has a piercing on his left eyebrow. His hair is long and black with purple highlights. He also wears some sort of large white belt.

Vladimir's Corel character, along with Katie Gelson, Larry and Butters.

Vladimir and other vampires catch Butters spying on them.

Vladimir and other vampires inducting Butters into the Vampire Society. 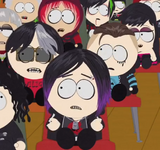 Vladimir sitting in front of Larry in "Goth Kids 3: Dawn of the Posers".

Vladimir during the "Black Friday" trilogy, fighting for the PS4 in Stan's army.