The Vegan Boy is a South Park Elementary student who appears in Season Twenty-Three episode, "Let Them Eat Goo". His name was not revealed. When Nichole and Bebe argued with Eric Cartman, wanting healthy food to be served in school, he immediately joined the discussion. He joined the girls' side, asking for vegan food in school.

The Vegan Boy has dark brown hair. He wears a large yellow long-sleeved shirt with "VEGAN" in green written on it, blue pants, and black shoes. He is much shorter than the 4th graders.

Images of the Vegan Boy 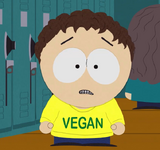 The vegan boy trying to argue with Cartman.