What did everybody think of last nights episode? “Season Finale" 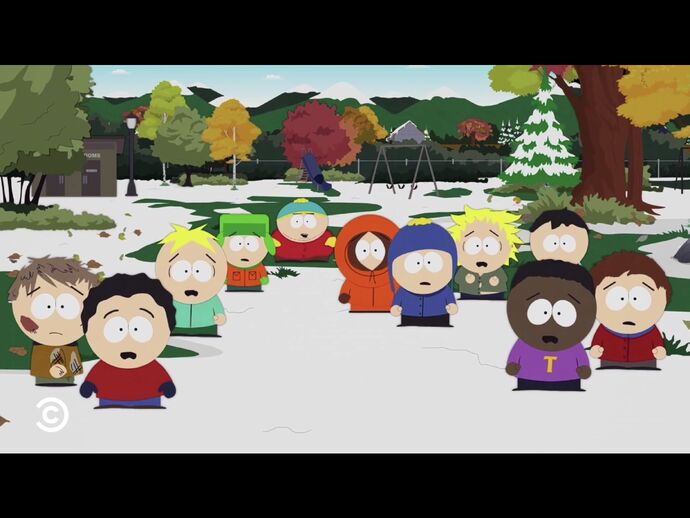 Be sure to share your opinions on Discussions or in the comments below, Refrain from leaving them on the episode page comments. You also can share your thoughts until Thursday afternoon on our Discord.

Personally, I believe it's time for a rant. I'm sick of crap, I truly am. This plotline has extended it's timeframe and stopped being funny by the end of LAST season. According to Nielson, this season has had the lowest season premiere ratings ever for SP and weekly episode ratings past Band In China have declined significantly.

Rotten Tomatoes gives this season a 40% from critics, the lowest in the show's history. Let's look at a bigger picture here, my personal opinion is that South Park hasn't been "good" since Season 19. Think about the last time Kyle or Kenny had an episode dedicated to themselves? Or the last time Kyle didn't get shit on? Even with the Tegridy plotline in full swing, Stan doesn't even get decided episodes to himself. It's only Randy and I believe this is because Trey and Matt want to focus more on the show's adults.

If that's the case though, why haven't Gerald, Stephen, and Stuart gotten equal attention? If we don't get a Tegridy plotline, as last night proved, we're likely to get a Trump/Garrison plotline then. Can we just get good old South Park back? Appears not. I know what everybody is saying "Shut up bro", "HighJewElfKing is a towel" etc but even you Tegridy Farms arc supporters have to admit this is getting old. In terms of THIS episode, I liked the B plot and I'll admit the Tegridy related plotline wasn't too bad this week. RIP Jason and it was interesting to see South Park's take on the Trump/ Rudy Giuliani situation in the news currently. I really don't have that many thoughts on this episode besides the hope that the Tegridy plotline is over. If not, despite being a true fan, I don't know if I can stand to watch this any longer if it continues this season, or past it. So I'd ultimately rate last night's episode a 5/10

For the true long-time fans, I really want to hear from you so get involved on Discord and Discussions: Do you really like this plotline and should South Park get back to their roots, will you stop watching if this plotline goes on any longer? For the Tegridy Farms supporters, I recommend you check out this interesting article about how South Park has shifted focus from the boys to Randy.

Do you agree? Be sure to use the methods listed above to share your reactions!

New Wiki Editors: Check out Wiki Editing 101 To help you kickstart your wiki editing adventures! ALSO PLEASE NOTE THE WIKI IS NOW OPEN TO ALL EDITORS, INCLUDING ANON EDITORS (WITHOUT A FANDOM ACCOUNT)

Retrieved from "https://southpark.fandom.com/wiki/User_blog:HighJewElfKing/Season_Finale_Thoughts_and_Reaction?oldid=363422"
Community content is available under CC-BY-SA unless otherwise noted.