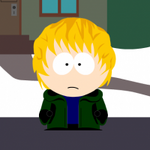 File:C_F.png|thumb|400px|I have no life. Seriously. I actually spent about three hours doing this. By the way, does Mysterion look a bit too overweight?]]

For official purposes, I don't exist. But this isn't official, so screw it all to hell.

Hello, I'm the picky one. As in, I pay attention to detail. For example, Bebe was booing her own cheerleading skills in the wide shots at the beginning of Douche and Turd. I noticed that. I mean, there's worse ways to be picky - for example, Ztryan's obsession with correcting the technical things in links that make no difference to the appearence of the article or to the destination of the links, but still, I guess we're both obsessive compulsive.

The other thing I get annoyed by is grammatical errors. I'm serious, every time I see someone tack a bit onto the end of a sentence with no punctuation or lack of capital letters, I go beserk. Apostrophe abuse is my pet hate.

Other than that, I have been compared to Kenny on a few occasions. Several good reasons - perverted sense of humour, hair colour (plus the fact it looks like I've been electrocuted), and we share similar amounts of luck - specifically, very little. I've also recently broken free of World of Warcraft - F.E.A.R. has me now.

I also read a lot, but to go on about that would be silly. So, instead, let's go on about that drawing I did of Coon and Friends - you can see it in the top right corner of this section. It was done with a 2H pencil and the automatic contrast control on Photoshop. I gave Kyle and Clyde flight abilities because it looks supremely cool. I couldn't draw Timmy, because it kept coming out like some sort of really pluntly shaped buttplug, and I'm convinced Kenny looks a little overweight. It might be that I did his left hand too small. I don't know.

You're actually looking at a compressed version, too. I did something to the scanner (none too sure what) that made the original come out at some ridiculous number of pixels (11000 by 8000 or thereabouts, and I'm not exaggerating) so I had to condense it. It's now something like 2500 by 1800, still ridiculous considering it was originally on A4 paper. I kid you not.

The only other thing I'll say is I really get annoyed by iTunes not putting South Park up until Saturday. Because I have to buy each episode to watch. Because I don't get Comedy Central UK and then it doesn't air until Friday night. Bloody Apple....

Retrieved from "https://southpark.fandom.com/wiki/User:To_Blindly_Go?oldid=290925"
Community content is available under CC-BY-SA unless otherwise noted.