Cartman and the Hobbit
"The Real South Park" was a sketch featured on Comedy Central Amsterdam. The sketch features a live-action adaptation of what would be a typical day on the lives of the boys.

The sketch begins at South Park Elementary where Mr. Garrison along with Mr. Slave are demonstrating the kids what "tossing the salad" means.

The class then goes on a field trip to Amsterdam where Eric Cartman shows the other boys a whore, since according to him, "All women in Amsterdam are whores." He and Kyle then get into an argument where Cartman compares Kyle's mother to Anne Frank, whom he calls a "fat Jew whore", in which Kenny gets pushed into traffic where he is run over by a GVB tram. The sketch ends with Stan and Kyle saying the typical "Oh my God, they've killed Kenny!" "You bastards!" 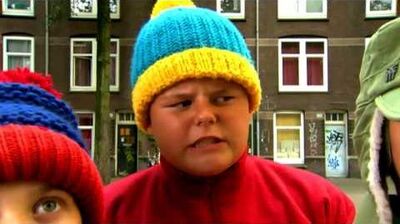