The Book of Mormon is a satirical musical with a book, lyrics, and music by Trey Parker, Matt Stone (the creators of South Park) and Robert Lopez. Parker and Stone co-created the music with Lopez, who also co-wrote and co-composed Avenue Q. 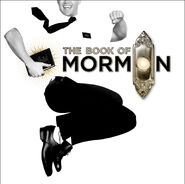 Retrieved from "https://southpark.fandom.com/wiki/The_Book_of_Mormon?oldid=351505"
Community content is available under CC-BY-SA unless otherwise noted.