For the main quest in South Park: The Stick of Truth, see The Bard.

The Bard is Jimmy Valmer's alter-ego in South Park: The Stick of Truth. He is the singing bard of the Drow Elves and is one of the six playable partners in the game.

The Bard wears a yellow shirt, a belt, blue pants, and brown bardic boots. He has a green lumpy scarf that doubles as a cape, a brown satchel, and a newspaper-hat with a long white feather and has crutches.

"The Maiden from Stonebury Hollow"

The Bard sings this song in "Song of Buffness" to boost the ability power of his allies, as he is a bard. To ensure that The Bard succeeds in doing that however, the player must mash a specific button if he stammers. The first time he had to sing it is the attack on the Giggling Donkey Inn, in which The Bard is the player's enemy. During this time, he always succeeds in singing perfectly to his allies without any problem, but when he is one of your allies, he will always have problems stuttering while singing.

The Bard does not make an appearance until the quest The Bard, where he is in possession of the Stick. He is the main boss of the level. He doesn't reappear until you are brought to the Elven Kingdom, and only has one line. He again shows up when the school is being attacked if the player chooses to team with the elves. He helps you get inside with "bard access". Otherwise, he is only seen in the classroom. He helps in the attack of Clyde's Fortress and in the final boss battle, where he is one of the buddies that fight with you.

During the Recruit the Goth Kids quest, The Bard becomes an available ally. His standard attack is ranged, which allows him to hit any enemy for moderate damage. Despite lower-than-average HP, The Bard is a decent, all-around Buddy, and can help with his many odd special attacks, acting as a supporting cleric more than a fighter. Despite this, The Bard has no added perks which he can use in battle, and his basic attack can be weak later in the game.

The Bard in the basement of the Giggling Donkey. 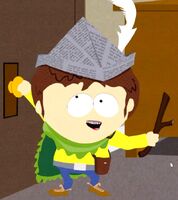 "I have the Stick of Truth which means I control the universe, and I say holding the doorknob is okay." 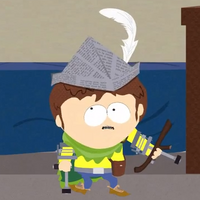 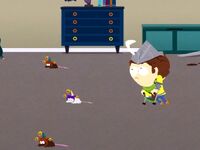 The Bard and his bardic rats with bardic hats. 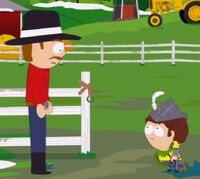 The Bard talking to Farmer Denkins about the flute in "Magical Songs". 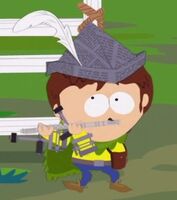 The Bard playing the flute in "Magical Songs". 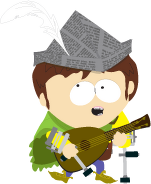