• The 6th Grader with Green Hat

• The 6th Grader with Brown Hat

The sixth grade classroom appeared in "Breast Cancer Show Ever", when the children are seen exiting it. The room has yellow walls, bluish green floors, roomier desks with green chairs and a history timeline on the wall along with other various posters and documents.

They appear much larger than the Fourth Graders, but slightly smaller than adults and teenagers. They are also drawn with a wide variety of different body shapes. The majority of them do not wear hats.

Images of the Sixth Graders

The Sixth Graders in "The Unaired Pilot".

The Sixth Graders seen firing fireworks in "About Last Night..."

The Sixth Graders agreeing to protect the boys from Trent Boyett.

The Sixth Grade leader and two of his friends on their bikes.

The 6th graders seen in Stan's anti-bullying video.
Add a photo to this gallery 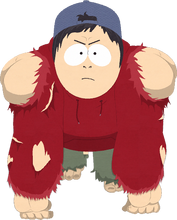 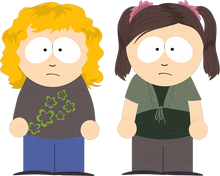 The 6th Grader with Brown Hat

The 6th Grader with Green Hat

Bully Girls
Add a photo to this gallery

Despite their reputation as tough bullies, in "Pre-School", Trent Boyett beat them up so badly that they all had to go to the hospital. They are also not very smart, as when the boys tried to pass Eric Cartman's butt with nipples drawn on as breasts, they bought it.

In "The Return of the Fellowship of the Ring to the Two Towers", Cartman stated that the 6th graders hate water. This was proven moments later, when they refused to cross the river to chase the boys to avoid getting wet or rusting their bike chains.

Their reputation of being bullies has faded in recent episodes, as seen in "Butterballs" when they took part in Stan's anti-bullying video.

The 6th Graders seem to be quite protective of each other, as in South Park: The Fractured But Whole, in a part of the game when The New Kid finds them in an abandoned place next to the school, they were worried about Jasper, who's According to them, it had disappeared for three days.

They appear in the South Park game, South Park Let's Go Tower Defense Play! as enemies in various levels. They are the only enemy to come in two completely different types: normal and on bikes. The normal ones are average, deal 5 points of damage to the town and take regular damage from all towers. The ones on bikes are faster, deal 9-11 points of damage and are vulnerable to fire-works towers.

They appear in the alleyway between Jimbo's Guns and Skeeter's Bar when the Goth Kids ask you to find some cigarettes. They are seen smoking. The player then battles them to find the cigars. Strangely, they are labeled as "Smoking Scoundrels" when being battled.

Retrieved from "https://southpark.fandom.com/wiki/The_6th_Graders?oldid=420607"
Community content is available under CC-BY-SA unless otherwise noted.