For other uses, see Tammy (Disambiguation).

Tammy Warner is a female 5th grader who was Kenny's girlfriend in "The Ring". She loves the Jonas Brothers. She had oral sex with Dave Darsky in the parking lot of T.G.I. Friday's. She's apparently the poorest person in school, followed by Kenny, making Cartman think that they are a perfect couple.

Sodomy: It was implied she has oral sex with Dave Darsky and Kenny in "The Ring", this also doubles as underage oral sex.

Tammy has been shown to be a bit of a tomboy. She also seems a bit smarter than she appears, as seen by the fact that she did not want to perform oral sex on the Jonas Brothers, of whom she is a huge fan. However, like many pre-teens, she is driven by hormones and upon seeing the boys, she opens her mouth, clearly willing. Although she is poor, she is shown to be pretty fashionable. She's a fifth-grader, making her a year older than Kenny and the rest of the boys.

Despite her reputation for being a whore, she actually feels bad about giving a 'BJ' and even apologized to Kenny.

She has long, streaked brown hair with blonde highlights. She wears black mascara, a red crop top, blue denim shorts, a golden heart necklace, and pink and purple bracelets. She also wears dark blue shoes and white socks with light blue stripes. Although she is poor like Kenny's family, her house appears to be better maintained.

Tammy at the Jonas Brothers concert with Kenny

Tammy with the other girls backstage

Tammy as she appears in South Park Studios. 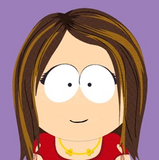 Tammy's icon in South Park: The Stick of Truth (scrapped). 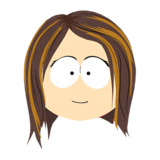 Tammy's head on SP and Me