SuperSexyLisa18, whose real name is unknown, was an internet troll who first appeared in the Season Twenty episode, "Wieners Out".

In "Douche and a Danish", the meeting is revealed to be taking place at the Airport Hilton. After Shwaggins and Gerald coordinate, SuperSexyLisa18 joins the troll against Denmark.

In "Fort Collins", she is only seen briefly at the impromptu troll party at the Broflovski Residence. She later leaves after Gerald insists the trolls leave.

In "Oh, Jeez", she is captured by TrollTrace.com after believing she had been hired by Hillary Clinton to infiltrate and sabotage the service.

SuperSexyLisa18 operates, and likely lives, in a basement. To her left is a monochrome television with a VCR attached and an old desk fan. Behind her are shelves filled with canned, and non-perishable foods. Also behind her is a cot and a pillow. In front of her are several empty bottles of John Adams beer, several smoked cigars, and her computer.

SuperSexyLisa18 is overweight, and is most noted by her unprofessionally done tattoos and her yellow buzz-cut. She wears a white shirt and blue jeans, and occasionally wears black sunglasses. She is often seen smoking a cigar and drinking beer. 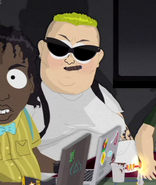 SuperSexyLisa18 at the Airport Hilton trolls conference in "Wieners Out". 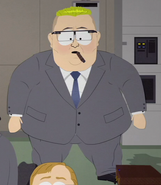 SuperSexyLisa18 captured by TrollTrace.com in "Oh, Jeez".
Add a photo to this gallery

Retrieved from "https://southpark.fandom.com/wiki/SuperSexyLisa18?oldid=413130"
Community content is available under CC-BY-SA unless otherwise noted.