None (Refused to be Christian)

In his first appearance in "Starvin' Marvin", Marvin was accidentally shipped over to the boys, who then took him into their custody, and tried to teach him the ways of the Americans. However, they are eventually found out, and forced to return him to Ethiopia, but not without a large number of mutant turkeys to feed his family.

In his second and most recent major appearance in "Starvin' Marvin in Space", Marvin got control of a spaceship, which he and the boys used to travel to outer space. Later in the episode, Marvin brought all of the other Ethiopians to the paradise planet Marklar.

Marvin makes a brief cameo in the 100th episode, "I'm a Little Bit Country" in the large crowd at the very end. It is not explained how he returned from Marklar. Though a group of Marklars were spotted next to him and presumably took him with them.

He does not know how to speak English, but he learns how to say a few of Cartman's catchphrases, such as "Sweet!" or "Yeah, I want the Cheesy Poofs!". He also learned how to say his name (that is, the name the boys give him). His real name in his clicking-based language sounds something like "(click)-(oh-in-uh)-ma'bin" - the boys find this difficult to pronounce and shorten it to just "Marvin" based on the ending. According to the government agents who greet his parents, his surname is "(click)-(click)-derk".

Starvin' Marvin is incredibly malnourished due to the famine in his home country, thus appearing incredibly emaciated. He has nothing to wear except a dirty loincloth. 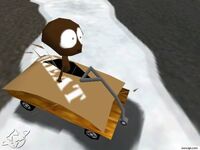 Starvin' Marvin at the controls of an alien spacecraft.

Starvin' Marvin in the space ship with the boys.