South Parknuts is a parody of South Park that premiered in 1998 on Mad TV. It features the cast of Peanuts modeled after South Park characters and set in South Park with both South Park and Peanuts references throughout the video.

The characters act like the South Park children with swearing, insults and killing all throughout the video, even with a jazz soundtrack and slower pacing similar to the Peanuts specials.

Charlie Brown (called "Charlie Frown" in this parody) walks up to Pig-Pen. Pig-Pen calls Charlie Brown a blockhead. Charlie Brown responds by calling him a 'filthy fuck'. Charlie Brown then insults Pig-Pen so much that he walks away sadly. Lucy calls to Charlie Brown and tells him to kick what looks like a football. Charlie Brown refuses because Lucy always pulls away the ball when he is about to kick it, making him fall on his ass. Lucy promises that she won't this time, so Charlie Brown runs up and kicks it. However the football spatters, revealing it to be dog poo. Lucy thinks that it looks like the profile of Golden Globe winning actress Linda Blair. Lucy believes it to be a sign from God that she is the next Chosen One or Messiah, while Charlie Brown says "Good Grief, what a sick bitch".

In Schroeder's house (called "Schloeder"), Lucy proclaims that God has chosen her to lead all of South Park to heaven. Lucy states that Schroeder can worship her and build her a temple. Schroeder refuses and Lucy asks if he is Jewish. Lucy is angry at Schroeder's rejection and forces him off the piano. She also shoves off Snoopy (called "Sloopy" in this parody), who appeared to hump her. Lucy freaks out because she has been humped by a dog and has germs.

In a classroom, the teacher says something to Charlie Brown (as the teacher is an adult, her words are simply heard as Wah, Wah, Wah as in the Peanuts' world. Charlie Brown then spells "autoerotic asphyxiation". Charlie Brown says "u" instead of "e" and is laughed at. Charlie Brown then states that he isn't a blockhead, he is "small-bodied". Lucy, Violet, and Peppermint Patty, come into the classroom wearing pastoral robes. Lucy declares that she is God and that after school they all must attend "The World Revelation Congregation" presumably to worship her.

Charlie Brown is then seen walking outside with Linus (called "Slinus" here) and complains about his sister Lucy. Linus talks like Kenny because he has his thumb in his mouth. Charlie Brown agrees that she is a fatass. The congregation is a crudely made shelter, with Lucy's usual stand out front. Lucy gives them "The Great Punch" which will take them to the Promised Land. Lucy is seen with a can out so that the kids will pay her. When hearing the nickels in the can rattle she declares that it is like cyanide, like poison, and how she just loves it. Lucy pours the nickels into the "Great Punch" bowl. Franklin, with a hat and voice similar to Chef's, stirs it up and comments that this punch is going to kill if drunken. Charlie Brown tells Linus that they have to do something. Linus walks up to two of Lucy's followers. Lucy's followers kill Linus with a chainsaw, prompting Charlie Brown to exclaim "They killed Slinus! You Bastards!" Rats are then seen going on Linus's mangled corpse (to which Charlie Brown says "Rats.") A follower calls him a blockhead, to which Charlie Brown denies by saying that he has a festively large cranium. Lucy sings that Charlie Brown is a big blockhead mirroring the "Kyle's Mom's a Bitch" Song. Everyone laughs at Charlie Brown. But Snoopy comes riding his doghouse like a Sopwith Camel with a gun on it and mows down everyone except Charlie Brown. Woodstock is seen eating Sally's eyes. Charlie Brown comments that it is just him and man's best friend. Snoopy then jumps up on Charlie Brown and beheads him. The show ends with Snoopy saying "Howdy-Ho!" in a similar fashion to Mr. Hankey. 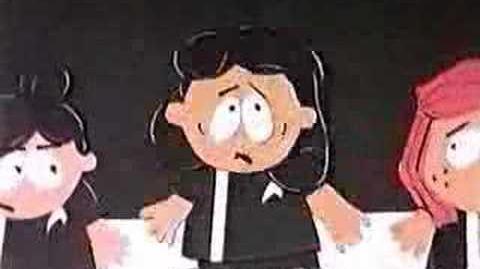 Retrieved from "https://southpark.fandom.com/wiki/South_Parknuts?oldid=364487"
Community content is available under CC-BY-SA unless otherwise noted.