The "South Park Theme" song plays at the beginning of most South Park episodes. It was composed and performed by PRIMUS, featuring the band's lead singer, Les Claypool.

The version of the song featured in "The Unaired Pilot" was much slower, however, it was sped up for broadcast. An instrumental version of the original broadcast song plays over the credits to most episodes. The theme song plays after the show's satirical disclaimer is displayed.

In Season One, the instrumental was originally constructed with a slightly quieter guitar and a more prominent trumpet. Up until "An Elephant Makes Love to a Pig", this version was used. In "Death", the trumpet was quieted and the guitar was made louder. In "Pinkeye", the intro was changed to include eerie Halloween sounds. For the rest of the show until "Fourth Grade", the instrumental with the prominent guitar was utilized, with minor but noticeable changes made starting with Season Three.

Also in Season Three, the boys' vocals were changed; Kyle Broflovski's voice stood out more in his and Stan Marsh's lines, and Eric Cartman's voice was updated. Additionally, Kenny McCormick's line was completely changed, with the replacement of his lines and a higher pitch.

Over the course of the series, certain lyrics have been changed, including an entire verse, originally sung by Kenny McCormick, sung by Timmy Burch in the Season Six intro due to Kenny's temporary death in the Season Five episode "Kenny Dies". From the episode "Fourth Grade", to "Kenny Dies", a hip-hop version of the song was used, which was remixed by Paul Robb. Afterward, they used a bluegrass remix of the song until mid-Season Ten, where the original song was remixed with "Whamola" by Les Claypool and his group, The Frog Brigade, from their album, Purple Onion.

When Comedy Central started airing reruns of older episodes, the opening theme was back to the way it was during Season Three, with the addition of several recent characters.

For the special "Goth Kids 3: Dawn of the Posers", a new theme song was made specifically for the episode. The lyrics were altered to fit the personality of the characters.

Starting from "Fourth Grade" up until Season Seventeen, the theme song showed various clips from previous episodes as the music played.

From Season Seventeen and onwards, a 3D computer-animated version of the intro is used, and it consists of the bus driver driving past various South Park locations as the the boys sing their lines, resembling the original Season One-Four intro in many respects, with the exception of the 3D animation and "Whamola" instrumental.

In the episode "Sons A Witches", the theme song was altered with many Halloween-themed elements added.

In Season Twenty-Three, a whole new Tegridy Farms intro based on the intro of Green Acres, sung by Randy Marsh, is used, replacing the normal opening theme since the latter half of Season Ten. The clips from the intro contain various scenes from the season's episodes. The closing theme retains the same, but it features Randy Marsh scatting "Tegridy Farms" over the song. The intro was only used for the first 6 episodes of the season.

In the episode "Tegridy Farms Halloween Special, the intro was altered with many Halloween-themed elements added . some lines were even altered

The episode "Board Girls" features a PC Babies intro to coincide with the storyline, but still kept Randy Marsh's "Tegridy Farms" scat during the ending.

"Turd Burglars" features a funk remix of the show's theme song for the One For The Ladies show which sang by the female members of the show with the announcer announcing the title. This episode brought back the original instrumental ending theme without Randy Marsh's "Tegridy Farms" scat over the song as it was in the previous seasons.

The shows normal theme from the latter half of Season Ten returns for the only time in the twenty-third season in the finale "Christmas Snow".

There are a few episodes that have a unique intro. "Mr. Hankey, the Christmas Poo" starts with a cold open of the school choir singing "We Wish you a Merry Christmas". "Pip" begins with a live-action introduction from Malcolm McDowell. "Mr. Hankey's Christmas Classics" begins with a parody of the 1970 Christmas special "Santa Claus is Coming to Town."

In the lead up to Season Twenty-Five, the song was re-recorded with an orchestral rendition. The lyrics for Kenny used between Seasons One and Two are adopted in this rendition, sung uncensored and unmuffled. 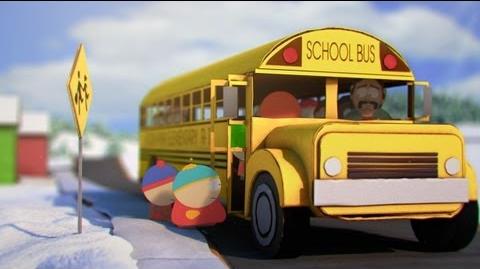