After a Paris Hilton-backed store, Stupid Spoiled Whore, was opened at the South Park Mall, most of South Park's female populace began flocking to the store in droves in order to get the latest "in style" fashion. After being dragged to the store by Bebe Stevens and Red, Wendy Testaburger expresses shock at how the store objectifies women. However, the rest of the girls ignore this and begin picking out clothes and other objects from the store, including Skanque.

Skanque is a turquoise liquid in a heart-shaped, glass bottle. It has a white, spherical stopper. "Skanque" is spelled out in white cursive letters on the front of the bottle. 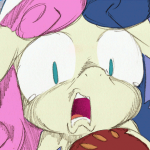