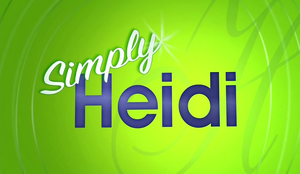 Simply Heidi is a talk show hosted by Heidi. It first appeared in the Season Twenty episode, "The Damned".

Freja Ollegard appears as a guest on the show to talk about her misfortunes with Skankhunt42 on the internet and her breast cancer website. She believes the trolling is catastrophic and hurtful. Heidi then goes on to read out live comments from her own website, primarily from faux-doctors, in support of Ollegard. However, the comments are all by Skankhunt42, and are just another troll on his part.

Comments left by Skankhunt42 are below. He leaves positive comments, but concludes with an inflammatory name with a joke or pun in it.

Retrieved from "https://southpark.fandom.com/wiki/Simply_Heidi?oldid=301020"
Community content is available under CC-BY-SA unless otherwise noted.