The Senior AIDS Researcher is an AIDS researcher who first appears on "Tonsil Trouble". He is in-charge of Mitch and his Cohort.

He is a scientist in his 50s or 60s. He is a Caucasian male who sports a mustache, he is balding and has gray hair in the sides of his head. He wears a doctor's coat.

Him and Mitch worked on the solution to the disease based upon Magic Johnson's money hypothesis. The two had managed to realize that if an HIV positive person is injected with cutted and crushed "about $180,000" into the vain, his AIDS will fade away - which finally cured both Kyle Broflovski and Eric Cartman.

He was seen in "Imaginationland, Episode II" as a staff member in the secret American "Project Imagination Doorway", that was set in Washington, D.C. This time he was wearing a construction worker's helmet and was voiced by Matt Stone.

He has a cameo in "Over Logging".

He was later seen again in "Pee" as one of the scientists who tried to solve the pee crisis in Pi Pi's Splashtown.

In "Sexual Healing" he can be seen in a cameo appearance helping the team of scholars find a cure to the "National Sexual Addiction problem" that the America had experienced.

He's also seen in a cameo as a USDA worker in "Gluten Free Ebola". 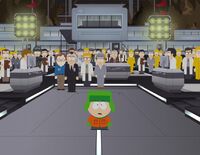 The Senior AIDS researcher can be seen in the centeral left

Senior AIDS Researcher's cameo on the right as a USDA worker in "Gluten Free Ebola"
Add a photo to this gallery
Retrieved from "https://southpark.fandom.com/wiki/Senior_AIDS_researcher?oldid=368462"
Community content is available under CC-BY-SA unless otherwise noted.