This character should not be confused with her counterpart (Rebecca) who has similar hair and clothes.

Sally "Powder" Turner was first seen in "Rainforest Schmainforest" as part of the Getting Gay With Kids choir but has been seen in the South Park Elementary 4th grade class since. Sally worked with Kenny McCormick on the egg science project in "Follow that Egg!".

Sally has similar hair and clothes to two other females in her class, Wendy Testaburger and Rebecca (aka "Red"). She wears a navy blue sweater and sea green trousers, as many of her female classmates do. Her hair is similar to that of Rebecca's, except that Sally lacks bangs, and she has a pink clip tying her hair back on the right. It's possible she wears a bra, despite her age, and stuffs it. However, chances are she doesn't, as Cartman and the others on the "Sexy Action News Squad" in "Quest For Ratings" claimed they should "make up stories of kids and present it on the news".

In her first appearance she wore a normal sweater, though she wears one with a pouch in all of her appearances afterward. The pouch was initially yellow, but episodes in Season Five and on depict it as being bright pink.

When she was into the "whore" fad in "Stupid Spoiled Whore Video Playset", she wore a lavender crop-top and a matching skirt and shoes.

Sally is unique for once having red eyebrows, unlike the other characters (except for Mrs. McCormick who also has red hair and eyebrows)

Sally and her mom.
Powder4.jpg
Sally fighting the boys.

Sally with the other girls. 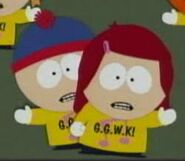 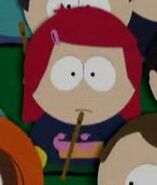 Sally at the recorder concert.

Sally as a whore.
Add a photo to this gallery

In the episode Stupid Spoiled Whore Video Playset she is with all the other girls, when all the other girls are saying nasty things to the boys while she didn't say anything which may mean she's shy. Also when Cartman flipped all the girls off she was the only one to be sad about it, so she may also be sensitive.

In the episode "Something You Can Do with Your Finger" it appears that she has a mother; who is stopped by the security guards. She resembles Heidi's mother in "Do the Handicapped Go to Hell?" and "Probably" which furthers the possibility of Sally and Heidi being related. She wears an orange sweater with green trousers and a white necklace. She has blonde hair.

Since Sally appears to have the same mother as Heidi as well as the same surname it's naturally assumed that Heidi Turner could be her sister. Heidi had a different set of parents in "Two Days Before the Day After Tomorrow" and "Marjorine".

She seemed to be interested in boys in "Stupid Spoiled Whore Video Playset" and flirted more than most of the other girls.

Episodes where Sally is prominent

Retrieved from "https://southpark.fandom.com/wiki/Sally_Turner?oldid=92698"
Community content is available under CC-BY-SA unless otherwise noted.