For other uses, see Sally (Disambiguation).

Sally Turner, also referred to as Powder, was first seen in "Rainforest Shmainforest" as part of the Getting Gay With Kids choir, but has been seen in the South Park Elementary fourth grade class ever since. Sally worked with Kenny McCormick on the egg science project in "Follow That Egg!". As of later seasons, she appears to have been demoted to a background character.

Sally has similar hair and clothes to two other females in her class, most notably Red and Wendy. She wears a navy blue sweater with a pink pocket and sea green trousers, as many of her female classmates do. Her hair is similar to that of Red's, except that Sally lacks bangs, and she has a pink clip tying her hair back on the right.

It is possible she wears a bra, despite her age, and stuffs it. However, chances are she does not, as Cartman and the others on the Sexy Action News squad in "Quest for Ratings" claimed they should "make up stories of kids and present it on the news".

In her first appearance she wore a normal sweater, though she wears one with a pouch in all of her appearances afterward. The pouch was initially yellow, but episodes in Season Five and on depict it as being bright pink. When she was into the "whore" fad in "Stupid Spoiled Whore Video Playset", she wore a lavender crop-top and a matching skirt and shoes. Sally was unique, being the only child character with red eyebrows, but in recent seasons they have become black, matching the other children.

A version of Sally with grey hair appeared in South Park: Bigger, Longer & Uncut, it is not known if this was Sally. It was likely a different character entirely as Sally is used as a character model for crowd scenes.

Sally Turner with a blue background.

Another shot of Sally in South Park: Bigger, Longer & Uncut.

Sally and her mom in "Something You Can Do with Your Finger". 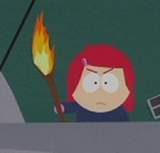 Sally fighting the boys in "Proper Condom Use".

Sally with the other girls.

Sally Turner and Tommy Turner in ¨A Very Crappy Christmas¨.

Sally at the recorder concert in "World Wide Recorder Concert".

Sally as a whore in "Stupid Spoiled Whore Video Playset".

Sally Turner angry with the girls in "Skank Hunt"

Sally Turner and other students singing in ¨Put It Down¨.

In "Something You Can Do with Your Finger", she appears with her mother; who is stopped by the security guards.

She is commonly seen with the popular girls "clique", signifying her social status as well as confirming her position as a popular girl.