PurpleHeadedQueefLicker, whose real name is unknown, was an internet troll who first appeared in the Season Twenty episode, "Wieners Out".

In "Douche and a Danish", the meeting is revealed to be taking place at the Airport Hilton. After Shwaggins and Gerald coordinate the troll, he and his pet iguana join the troll as 'PurpleHeadedQueefLicker'.

In "Fort Collins", he is only seen briefly at the impromptu troll party at the Broflovski Residence. He later leaves after Gerald insists the trolls leave.

In "Oh, Jeez", he is captured by TrollTrace.com after believing he had been hired by Hillary Clinton to infiltrate and sabotage the service.

PurpleHeadedQueefLicker operates in an office adorned with retro gaming paraphernalia. To his right, he has a CRT TV with various gaming consoles attached to it via a composite A/V switch. The consoles include a PlayStation 2 and an Atari 2600.

In front of him is a Super Nintendo Entertainment System and his computer. And to his left, is another CRT television with a VCR and an Xbox One attached. Also to his left is an Okama Gamesphere, which appeared in "Towelie".

PurpleHeadedQueefLicker is very overweight, and is most noted by his pet iguana. He wears a black shirt under an olive utility vest. He has blond, unkempt dreadlocks and has light facial hair. 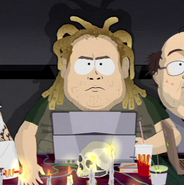 PurpleHeadedQueefLicker at the Airport Hilton trolls conference in "Wieners Out".

PurpleHeadedQueefLicker captured by TrollTrace.com in "Oh, Jeez".
Add a photo to this gallery

Retrieved from "https://southpark.fandom.com/wiki/PurpleHeadedQueefLicker?oldid=355613"
Community content is available under CC-BY-SA unless otherwise noted.