Ms. Stevenson served as the Kindergarten teacher for some time, during which one of her students, Ike Broflovski, developed a crush on her, passing her love notes and drawing her with hearts around her. When this was brought to her attention by hallway monitor Eric Cartman, she asked him to stay behind after class and tried to discuss why these feelings were inappropriate. She was instead revealed to be a pedophile when she became sidetracked and instead admitted she admired him and found him "mysterious" and acknowledged having feelings for him, leading them to start a romantic relationship, going on many dates together, as well as an intimate relationship involving sexual intercourse, which cannot be consensual due to the fact Ike is 3-4 years old. She tried to keep her relationship secret from the rest of the town.

Ms. Stevenson's relationship with Ike was exposed by Kyle, who discovered them in the bath together, and she insisted that he was mature enough for a relationship despite his age. They were soon caught and turned in by Cartman when he caught the couple making out in the halls. She falsely claimed to be an alcoholic and attended rehabilitation for her drinking problem as a way to escape jailtime, during which she revealed to a counselor that her uncle would make her and her twin sister kiss and would take photographs.

She then kidnapped Ike and the two prepare to flee to Milan, claiming that she and Ike dreamed of buying a house in Tuscany. They were pursued by Cartman and Kyle, who brought along Cartman's hallway monitor crew, storming the hotel to stop the couple from fleeing the country, and tracking them to the roof of the airport Hilton. They were cornered by the boys and the police, who demanded that she surrender. Not wanting anyone interfering with their love life, Ms. Stevenson said she and Ike would jump off of the building so that she could be with Ike for eternity. However, Kyle convinced Ike that he was too young for a relationship at his age. Ms. Stevenson did not listen to reason and jumped, but Ike did not. Ms. Stevenson realized Ike had abandoned her shortly before she died on impact to the ground.

She was replaced by a substitute as seen in "Fatbeard", before a new kindergarten teacher was first seen in "Dances with Smurfs". Neither character has been named.

An identical character appeared in "A Song of Ass and Fire" as a shopper outside the South Park Mall. This could be considered her twin sister, although it is likely just an Easter egg.

Ms. Stevenson wore a dark gray sweater with a pink shirt underneath. She wore a blue knee-length skirt and black high heeled shoes. She had long blond hair in a ponytail, and was considered by most of the men in town to be attractive.

She was an extremely manipulative and predatory pedophile, manipulating a very underage and juvenile Ike into having a relationship with her, despite the extreme immorality and illegality of said relationship. She also used lies and manipulation to escape punishment. She even resorting to kidnapping Ike and having him enter a suicide pact to fulfill her deranged desires.

Having a picnic together.

Getting drawn as caricatures.

Stevenson and Ike are busted in "Miss Teacher Bangs a Boy".

Ms. Stevenson explaining to Kyle that her love with Ike is true love.

Cartman busts them to Principal Victoria.

Holding a press conference about being an alcoholic.

Stevenson kidnapping Ike from his home.

Stevenson in a hotel room trying to entice Ike.

Stevenson getting ready to jump off the roof of the building.

Falling to her death. 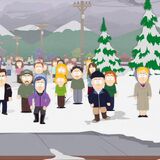 Her character model reused in "A Song of Ass and Fire".