Mitch is an AIDS researcher who first appeared and prominated on "Tonsil Trouble". He contiunes to appear in non-speaking cameos throughout the series.

Mitch is a scientist in his 30s or 40s. He is a Caucasian male who has red hair and he wears a doctor's coat and glasses.

Mitch and his superior, Senior AIDS researcher, worked on the solution to the disease based upon Magic Johnson's money hypothesis. The two had managed to realize that if an HIV positive person is injected with cutted and crushed $180,000 into the vain, his AIDS will fade away - which finally cured both Kyle Broflovski and Eric Cartman, despite some prior disbelief voiced by his cohort.

Mitch was later seen again in "Pee" as one of the scientists who tried to solve the pee crisis in Pi Pi's Splashtown. He was also seen in a cameo in "Over Logging" where he is seen as one of the Internet monitoring scientists. 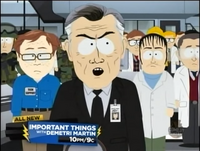 Mitch's cameo as part of the Internet scientists in "Over Logging".

Mitch's cameo on the left as a USDA worker in "Gluten Free Ebola".

Mitch in the background of the DNAandMe lab.
Add a photo to this gallery

Retrieved from "https://southpark.fandom.com/wiki/Mitch?oldid=372005"
Community content is available under CC-BY-SA unless otherwise noted.