For other uses, see Mike (Disambiguation).

Mike "Vampir" Makowski is a 5th grader who appears in the Season Twelve episode, "The Ungroundable". He is the leader of the South Park Vampire Society and an avid fan of the Twilight series.

His appearance in "The Ungroundable" makes him seem like a calm, innocent kid; With him being dark inside, he is adopted to Mr. Adams. He is a big Twilight fan with the South Park Vampire Society, with reading books to them. On what he got his alise, Vampir, makes him feel the only special vampire of the group. As leader, he hosts the rituals when other kids want to be in the group. Aside from the Goth Kids, the Vampire Society is less frightening, spiritual and more positive with them not having to smoke and being away from coffee. The Goth Kids then suspected he was the reason as to why people used their style and made others confuse them with the Vampire Society, so they gagged him and planned to kill him, thinking everyone will go back to normal. Even though Mike admitted he is not really a Vampire, they still FedEx'ed him to the city of Scottsdale in Arizona.

He later reappears in the Season Seventeen episode "Goth Kids 3: Dawn of the Posers", along with another vampire kid, to join forces with the Goth Kids, Pete and Firkle, to try to uncover the camp turning Goths and Vampires into 'Emos'. It is still unknown that he befriended the goths after the episode. He cameos again later in the "Black Friday" trilogy as a member of the PlayStation 4 camp, along with other Vampire Kids.

Mike also appears to frequently remark, "per se" in his speech, even though it never makes any sense the way he says it.

Mike is seen in Clyde's army with other Vamp Kids. According to game files, he and the other Vamp Kids would play a much larger and significant role in the game, but were taken out in the final version of the game.

Mike appears in the From Dusk till Casa Bonita DLC of the game. He celebrates his birthday party at Casa Bonita, and “kidnaps” Kenny's sister, Karen, to turn her into a vampire.

He wears a black jacket and a black shirt with an image of a dead, bleeding white bird on it in front of a spider web, black belt-buckled shoes, gray pants with a red belt within tiny gray rhinestones and a skull for a belt buckle, three small spiked bracelets, black fingerless gloves, a bat wing earring on his right ear and plastic fangs. His hair is long and black with green fading down while parted on the left side, wears mascara and has two round piercings on his right eyebrow.

Mike and other vampires catch Butters spying on them.

Mike and other vampires initiating Butters.

Mike and other vampires in the woods, holding a ritual. 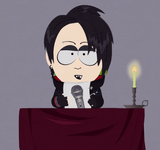 Mike giving a speech in "Goth Kids 3: Dawn of the Posers". 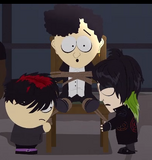 Mike during the "Black Friday" trilogy, fighting for the PS4 in Stan's army.

Mike at his birthday party in the South Park: The Fractured But Whole DLC.