Mick's Bowling is a tenpin-bowling and bar establishment in South Park. It has appeared two times so far in the series, making its premiere in Guitar Queer-O where Kyle hung out here and played Guitar Hero for money. He also became friends with the bartender. It also made a more recent appearance in Poor and Stupid where Kenny was drinking water when he saw the news report about Cartman's podcast where he goes on about Obama's tax on gasoline, which he claims is "fuckin' gay as hell!". They reappear in "You're Getting Old". Randy plays his own Tween Wave music here under his persona, Steamy Ray Vaughn, along with Steamy Nicks. 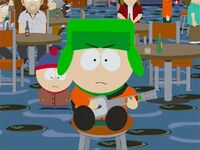 Kyle and Stan during "Guitar Queer-o".

Kenny during "Poor and Stupid".
Add a photo to this gallery

Retrieved from "https://southpark.fandom.com/wiki/Mick%27s_Bowling?oldid=114945"
Community content is available under CC-BY-SA unless otherwise noted.