Michael is male fourth grader who appears in several episodes with other handicapped children.

Michael is seen in "Up the Down Steroid" at the Special Olympics, but appears prominently at Lake Tardicaca in "Crippled Summer".

Michael has unspecified motor disabilities and an eye disorder as well as learning difficulties, along with many of the other special education class members.

Michael has brown hair and wears a red cap with a blue border. In "Crippled Summer" he wears the standard uniform of Lake Tardicaca. 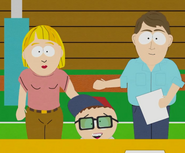 Retrieved from "https://southpark.fandom.com/wiki/Michael_(Special_Ed)?oldid=356267"
Community content is available under CC-BY-SA unless otherwise noted.