Mel Gibson is an actor known for roles in films such as Braveheart, and for his movie The Passion of the Christ.

Gibson is featured prominently in the South Park episode, The Passion of the Jew, in which the boys see The Passion of the Christ. Cartman believes the film was Mel Gibson's way of rallying people against the Jews, and idolizes him for it. Stan and Kenny, on the other hand, are so disgusted by the movie that they decides they wants thair money back. He and Kenny go to Gibson's house, only to discover that he is crazy. He threatens them with a pistol so they steal the money from his wallet and run away. He follows them back to South Park. He claims that saying his movie sucked is like saying Christianity sucks. Stan counters by saying that Christianity is fine, but focusing on how people died ends up with really bad results, convincing the town that Mel Gibson was wrong all along.

In the South Park episode, Imaginationland, Mel Gibson helps the United States government in coming up with ideas on how to fight the terrorists of Imaginationland.

Stan has a poster with Gibson for the film The Road Warrior on his bedroom wall.

Cartman has a poster of Gibson from the film Braveheart on his bedroom wall.

Cartman tells Kyle to "Prove Mel Gibson wrong" by throwing away his nunchucks rather than get his money back in the episode Good Times with Weapons.

In the episode, Good Times with Weapons, Cartman tell Kyle that he's seen The Passion and Mel Gibson says Jews are Snakes and liars, and if the Road Warrior says it, it must be true." Referring to Mel Gibson's cult classic movie.

In the episode, Miss Teacher Bangs a Boy, Miss Stevenson uses "the Mel Gibson defense," which entailed blaming her alcoholism in order to forgive the offense of sleeping with her student. 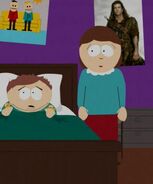 Gibson in Imaginationland
Add a photo to this gallery

Retrieved from "https://southpark.fandom.com/wiki/Mel_Gibson?oldid=38957"
Community content is available under CC-BY-SA unless otherwise noted.