Not to be confused with Maury Povich.

Maury is the Raisins Girls bouncer who first appeared in the Season 7 episode, "Raisins ".

When Lexus is going home, Butters comes up with a gift for her, so she calls Maury telling him to escort her to his bike, however, while she secretly points to Butters, claiming that she wanted Maury to keep him away from her, Maury understands what she wants and then prevents Butters from getting too close to her.

Maury later appeared in "You Got F'd in the A", where he tells Stan that he and his dance crew that they need to buy wings if they want to talk to the Raisins girls.

Maury wears a black tank top with Raisins logo on the right side, blue jeans and black shoes. He has messy spiky short brown hair, wide eyebrows, a small nose and a double chin. Although Maury appears to be overweight, he has shown to be quite muscular. He looks about the same height as a 6th grader. 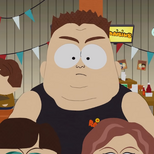 Maury in South Park: The Fractured But Whole.
Add a photo to this gallery

Maury appears as a boss in South Park: The Fractured But Whole.

Maury seems to be very active about his job, he seems to be always present when any of the Raisins Girls need help. Although Maury seems to take his job very well, he lost a battle to New Kid in South Park: The Fractured But Whole.

Retrieved from "https://southpark.fandom.com/wiki/Maury?oldid=377743"
Community content is available under CC-BY-SA unless otherwise noted.