Master P is a singer who performed the song "Kenny's Dead" on Chef Aid: The South Park Album. He also appears in the accompanying mockumentary, Chef Aid: Behind the Menu, in which he talked about Chef's influence on his career.

Master P is one of the musicians who join the boys' band, Moop, in their strike against illegal music downloading in the South Park episode "Christian Rock Hard".

In "Christian Rock Hard", he can be seen at his home wearing a black and gold jersey, a white sweat bands, black shoes, and silver chain. He has black hair braided in the style of cornrows, a popular hair style amongst African Americans.

In the mockumentary, Chef Aid: Behind the Menu, he can be seen wearing a black baseball cap backwards, a black leather coat, sunglasses, earrings, and a gold chain.

In the music video and cover for "Kenny's Dead", he can be seen wearing a black leather coat, black fedora, gold chain, sunglasses, and a brass knuckle with his name on it. He appears throughout the video in a car, with Chef, and performs the lyrics in the song. 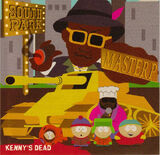 Master P featured on the cover of the "Kenny's Dead" single.

Master P in Chef Aid: Behind the Menu.
日本語 中文
Community content is available under CC-BY-SA unless otherwise noted.
Advertisement