For the location, see Marklar (Planet).

The Marklar are an intelligent species of identical aliens who refer to all people, places, and things as "Marklar". Despite being almost identical and all having the same name, they are still somehow able to tell each other apart and address each other as Marklar without ambiguity.

They first appeared in the episode "Starvin' Marvin in Space". In which during the episode, a single Marklar visited Earth, specifically on Ethiopia, and attempted to make first contact with lions, but was subsequently killed. His spaceship was found by Starvin' Marvin, who used it, with help from the boys, to bring his people a new home on the Marklar's home world in order to escape from Christian missionaries, who are intent on converting the Ethiopians to their faith. After Kyle Broflovski explained the situation to the Marklar in their language, the Marklar are touched by Kyle's words and allowed the Ethiopians to live on their planet.

They are also seen again on their home planet in "The Red Badge of Gayness", which the Marklar are briefly seen hearing Eric Cartman's scream coming from Earth after his beard was torn off.

Some Marklars also make a cameo at the awards ceremony in "The Biggest Douche in the Universe". They also appear in the final song in "I'm a Little Bit Country".

All Marklars are almost identical, with orange skin and egg-shaped heads. They have prominent veins on their scalps and have yellow eyes. The only unique traits amongst different Marklar are the veins on their heads, the color of the robes they wear, and their height. The leader is the only known Marklar to wear a yellow robe and have a gray beard.

Marklar as seen in "Starvin' Marvin in Space".

Marklar's brief cameo in "The Red Badge of Gayness". 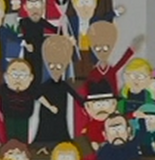 Marklar in the crowd in "I'm a Little Bit Country".

Marklar's cameo in "The Biggest Douche in the Universe".

Marklar cameo in "Trapped in the Closet".

All quotes are from "Starvin' Marvin in Space".