"Make Bullying Kill Itself" is a song performed by the South Park Elementary school children in the Season Sixteen episode, "Butterballs".

Bucky Bailey's Bully Buckers is the producer of the Stop Bullying video. He bullied Mr. Mackey and the students during the school assembly on bullying, until someone volunteered to make the video. Stan Marsh eventually volunteers, makes the video, writes the song, and directs everything.

The entire school joins in an effort to raise awareness against bullying and uses Butters as its victim. Kyle, however, feels that Stan hasn't made the movie to promote awareness of bullying, but rather has done so for his own satisfaction, since it will be publicized nationwide for profit, rather than given out for free. Bucky Bailey gets mad at Stan for selling the video without consulting him, as revenue from it, which was Bailey's idea, could have brought national exposure to Bully Buckers. Later, Mick Jabs, the president of the studio that purchased the video, corners Bailey in the school boys' room, and presents a cease and desist order from his lawyers. Stan and Butters go on The Dr. Oz Show to promote the movie, but as Dr. Oz continuously bullies Butters to get him to reveal specifics, Butters finally snaps and attacks Oz, making the country see Butters not as a bully victim, but as a violent psychopath. Following this incident, Jabs' Studio drops the video and all copies of it are destroyed.

Lip dub is a form of viral video where a person or group mimes a song in time to a pre-recorded backing track. These types of videos are popularly created by high schools across the country to raise awareness of a topic or promote school pride and bring students together.

Clyde Donovan:
You wanna know who I hate?! I hate that kid Butters! He's a dork!

Stan Marsh:
Hey guys, guys! Don't pick on Butters! That's not cool. You can't do that. Bullying? Did you know that in America, hohoh, over 200,000 students every day are afraid to come to school because of bullying? At South Park Elementary we're better than that. Come on. Let's all put an end to bullying. Right now! Five Six Seven Eight!

Eric Cartman:
Boy you like my body. Set the mood, let's play!
You can touch me anywhere except for my vajayjay.

Butters Stotch:
Trapped inside the darkness of my mind.
I try to break free. The words are so unkind.

(The song probably would have continued for much longer, but at this point, Butters asked everyone to stop because he did not want to take part anymore. The rest of the song is never heard.) 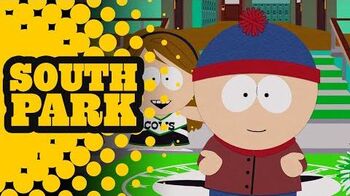