Lorde's first appearance was at the end of "Gluten Free Ebola" singing at the boys' backyard party, which the boys believe that Randy knows a friend who's related to her.

During the events of "The Cissy", a reporter with SPIN magazine named Brandon Carlile arrives in South Park trying to get a story about Lorde. Her story is expanded showing whereby Randy dresses as a woman to use the woman's toilet between lunch breaks. He found his voice sounding good while singing in the bathroom and while he accidentally became a pop singer. Her image was marketed as a 17-year-old girl from New Zealand, but in reality, she is a 45-year-old geologist in Colorado. Her record producer tells her to keep making songs while Randy thinks some people know who really is Lorde, such as hearing him sing alone. The money she earned from her songs is hidden away behind a crack in a wall in the garage.

Stan discovers his father's secret, even with her lyrics for a recent Hunger Games movie theme being changed, and he shows him how his voice is manipulated with an app on the tablet PC, with his voice being autotuned as a girl. Stan faints at the discovery.

Lorde visits the boss of the U.S. Geological Survey and hears that she is getting her own executive bathroom after females in the office pressure the boss with leaving why they feel uncomfortable being in a bathroom with her. She was later stated on a news report that she's in a severe depression about how others see her on her Twitter, with wanting to return to being herself and then disappearing for several days.

Sharon talks to Randy, swirling in thoughts, that every kid enjoys Lorde because she is different than other pop artists who show genitals to them. As she states her the inner feeling in everyone, the truth that wants to be heard. Sharon wants Lorde to not change because of others and reveal the truth or else it is pointless. That motivation Lorde has heard made her finish her song.

As Lorde, her most famous song is "Push (Feeling Good on a Wednesday)", actually sung by real-life singer and songwriter Sia.

While the full version of the song plays, a montage of people nodding to the song, believing they should not control Lorde of who she is, along with the boss canceling her personal bathroom. When he discovers the truth, Brandon Charlile planned to publish a scandalous story of Lorde's exposed appearance but ends up deleting it after being moved emotionally by the song.

In "Freemium Isn't Free", Stan becomes addicted to the game Terrance and Philip Give Us Your Money on his smartphone. He runs up the bill in thousands of dollars and his father has to pay for it with his savings selling Lorde songs.

In "#HappyHolograms", Stan reveals to Kyle and Cartman that Lorde is his dad, referred to as the PewDiePie of music, while Randy reveals it to Shelly. It was said that a hologram of Lorde appeared in the Washington Redskins: Go Fuck Yourself Holiday Special. It is not clear if Randy kept his Lorde persona, but he probably did.

Lorde is referenced by PC Principal in "Stunning and Brave" when he shames someone for "claiming to be advocates of transgender rights, but really just wanting to use the women's bathroom!" as Stan and Sharon Marsh look at Randy.

Lorde has a long dark brown curled wig that is parted to the left, dark purple lips and curved eyelashes.

Lorde wears a Cramps tee-shirt depicting the album cover Bad Music for Bad People and a black skirt while being questioned for using the woman's toilet at the USGS geologic center. During performances, she wears a black dress with a mesh top and sleeves and small black boots. The poster has her wearing a blue ringer tee-shirt and black pants.

It was revealed by Sharon Marsh that Lorde uses fishnet stockings, but was never seen wearing them. 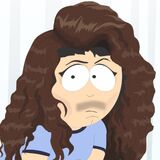 A poster of Lorde in Shelly's room.

Lorde in a meeting.

Lorde rubbing her "clit" on stage.