Many episodes of South Park revolve around either video games or video game consoles.

Chinpokomon is based on the real television show, Pokemon. Chinpokomon is seen in the Episode with the same name "Chinpokomon". It hypnotizes The Boys. While playing a game a woman is in the game and says something in it Japanese.

Main Article: Heroin Hero
Heroin Hero is a video game appearing in "Guitar Queer-o". Heroin Hero relieves you of stress: there's no score or time limit, you just chase a pink dragon through a magical enchanted forest while injecting simulated heroin, but you never catch it. There exists a fan-made game on the internet that is playable here.

Was a spin off of Heroine Hero meant to help cure the addiction to Heroine Hero. No gameplay has been shown of it. Paris Hilton can be seen on the cover of Rehab Hero.

Guitar Hero is the main plot device for "Guitar Queer-o". Stan and Kyle attempt to become superstars in the game.

World of Warcraft is the main plot in the episode "Make Love, Not Warcraft". 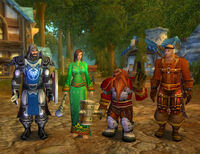 In the episode "Margaritaville", Cartman betrays Kyle for the game.

Call of Duty: World at War

Everyone is playing it at the start of the episode "The Ungroundable".

The Boys play this game in the episode "Sexual Healing", although it was appearing as a fighting-game between Tiger Woods and his wife. however, in the end of the game, he was forgiven, and return to the golf, making it go to be a Golf-game.

Seen in the episode "Chinpokomon", resembles a Nintendo 64.

First seen in the episode "Towelie" and is rarely seen in the series. Okama is Japanese for "gay person" or "male transvestite" while GameSphere is a mixture of xBox and Gamecube.

Stan, Kyle, and Cartman own one. Cartman's is seen in the episode "Tsst". In "Tonsil Trouble", Kyle mentions he is going to break it because Cartman gave him AIDS. The Harley riders mention kids being around loud stuff, such as the Xbox, when they realize that they aren't the loudest ones in South Park.

The PSP appeared in the episode "Best Friends Forever". It was apparently sent down to Earth by God to find the next Keanu Reeves.

This console appeared in the episode "Chickenpox" at the McCormick's House. It is an early console from the 1980s.

Never actually seen, but the boys wanted to buy one in "The Tooth Fairy Tats 2000".

Never seen, but Cartman owns one as he wanted GTA: Chinatown Wars.

Retrieved from "https://southpark.fandom.com/wiki/List_of_video_game_references?oldid=99082"
Community content is available under CC-BY-SA unless otherwise noted.