This list is for minor characters from South Park: Bigger, Longer & Uncut.

Andy Richter is a former co-host of Late Night with Conan O'Brien. Richter appeared on Conan's show, along with Terrance and Phillip and Brooke Shields, in the film, South Park: Bigger, Longer & Uncut. He has no dialogue.

The Arquette family of actors is comprised of Alexis, David, Patricia, Richmond, and Rosanna. In the film, the Canadian army bombs the Arquettes, after killing the Baldwin family.

The Baldwin family of actors consists of Alec, Daniel, William (Billy), and Stephen. In the film, the Canadian army bombs and kills the Baldwin family, as well as the Arquette family.

Bill Gates is the founder and chairman of Microsoft. Gates appeared in the film, South Park: Bigger, Longer & Uncut, in which he was shot and killed by General Plymkin, who didn't care for Microsoft product Windows 98.

Brian Dennehy is an American actor who is voiced by Matt Stone. In the film, Dennehy appears during the song, "What Would Brian Boitano Do?", mistakenly thinking that someone was calling his name. Brian Dennehy can also be seen in various shots in '200' and '201' with all the other annoyed celebrities.

Brooke Shields is an American actress. Shields appeared in the film as a guest on Late Night with Conan O'Brien, along with Terrance and Phillip. When she said she once farted on the set of The Blue Lagoon, Terrance proceeded to slap her.

The Canadian Minister of Movies appeared in the heated debate between Sheila Broflovski and himself, and also at the U.N. Building.

The Clitoris appears in the film where she tells Stan Marsh to save Terrance and Phillip and gives him the advice to be confident, because "chicks love confidence", in order to win the love of Wendy Testaburger. 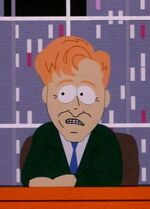 Conan O'Brien was the host of Late Night with Conan O'Brien. O'Brien appeared in the film in which he hosted guests Brooke Shields and Terrance and Phillip, before turning Terrance and Phillip over to Sheila Broflovski and Mothers Against Canada to be executed. Feeling guilty for betraying them, he commits suicide by jumping out a window and falling onto a car. 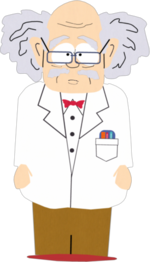 Doctor Vosknocker appeared in South Park: Bigger, Longer & Uncut and was voiced by "Monty Python" star Eric Idle. He introduced the V-Chip and implements it into Eric Cartman's head to stop him from swearing.

General Plymkin is a US Army Officer who was in charge of planning and carrying out the assault on Canada. 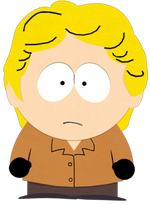 Gregory caught Wendy's romantic attention (though she denies this to Stan). Gregory is the one who points Stan, Kyle, and Cartman towards "The Mole", to free Terrance and Phillip from Sheila's organization, Mothers Against Canada.

The Mole aided Stan, Kyle, and Cartman in infiltrating the USO Show, and would have succeeded in rescuing Terrance and Phillip if Cartman had not forgotten to shut down the security system. As a result, the Mole was attacked and killed by the army's guard dogs. At his moment of passing, The Mole seemed to finally embrace the thought of meeting God in the next world.

Mr. Homeless Guy is an alcoholic homeless man who the boys get to pay for tickets for Asses of Fire.

Winona Ryder is an American actress who appeared in the film, in which she performed her famous ping-pong ball trick at the USO show.

Español
Community content is available under CC-BY-SA unless otherwise noted.