This list contains characters that were only mentioned or seen in South Park. 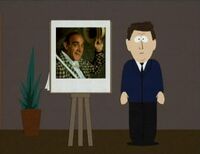 A picture of Abe Vigoda appeared in the episode "Summer Sucks" to represent the notion that "Good times will be had by all".

Alan Alda's image appeared in Kyle's nightmare of killing Jesus during the episode "The Passion of the Jew".

Allen Ginsberg was a 1950s, leftist, Beat Generation poet opposed to militarism, economic materialism and sexual repression who's work is given credit for laying the seeds of the 1960s hippie movement. He was called a communist but was kicked out of communist countries Czechoslovakia and Cuba when he called for free speech. For that he was sent to hell and is seen to the left of Jerry Garcia in Do the Handicapped Go to Hell?.

An image of Andy Dick is seen above Satan's fireplace during the song, "Christmas Time in Hell", in the episode "Mr. Hankey's Christmas Classics". The photo is seen more closely as Satan sings the lyric, "We've got to make room for Andy Dick".

The Back Dorm Boys

Main article: The Back Dorm Boys

The Back Dorm Boys appear briefly in the episode "Canada on Strike" as two of the internet celebrities waiting for their theoretical payments. They may or may not be deceased as they were not seen fighting or dead.

Eric Cartman uses Bill Belichick as an example of how white people cheat to get ahead in the episode "Eek, A Penis!".

Bob Hope was a comedian, singer, dancer and actor famous for his "Road" movies with Bing Crosby and Dorothy Lamour, NBC radio and television specials, his traveling USO shows for American troops and the song "Thanks for the Memory". He hosted the Academy Awards more than anyone else and was known for rapid fire, one-liners. He's seen in hell in Do the Handicapped Go to Hell?.

Bryan Adams is a Canadian singer/songwriter, famous for such songs as "Summer of '69" and "It's Only Love".

In the film South Park: Bigger, Longer & Uncut, the Canadian Minister of Movies claims that "the Canadian government has apologized for Bryan Adams on several occasions."

In "Royal Pudding", he is seen as one of Canada's officials in the royal wedding.

Bubb Rubb appears briefly in the episode "Canada on Strike" as one of the internet celebrities waiting for their theoretical payments. He may or may not be deceased because he was not seen fighting or dead.

Corey Hart is a Canadian singer in "Royal Pudding". He was seen at the wedding of the Prince and Princess of Canada.

Carmen Electra is an American model and actress. In the episode "The Succubus", the optometrist shows Eric Cartman a picture of Electra and a picture of Britney Spears and asks him to say which one looks better.

After seeing this episode, Courteney Cox thanked Trey Parker and Matt Stone for "mentioning her in that episode" at a dinner for a mutual friend.

Daisy Fuentes is a Cuban model and actress. In the episode "Roger Ebert Should Lay off the Fatty Foods", Van Gelder, a crazed boy who escaped from the planetarium, exclaims his obsession with Daisy Fuentes and why she is on America's Funniest Home Videos.

Dean Martin (aka "King of Cool") was a heavy-smoking, famous lounge singer ("Ain't That a Kick in the Head?"), comedian and actor, member of the Rat Pack and partner to Jerry Lewis in many films and shows as the popular comedy team, Martin and Lewis. He hosted the early comedy roast television show "The Dean Martin Celebrity Roast". He appeared in hell in Do the Handicapped Go to Hell? and can be seen to the right of Frank Sinatra.

Deborah Carroll appeared in the episode, "Tsst", as one of the nannies on the television program Nanny 911, along with Yvonne Finnerty and Stella Reid.

Donald Trump is a businessmen, celebrity and the 45th President Of The United States. He was shown in the episode "The Entity" as one of the celebrities Mr. Garrison invites to see his new product IT.

Duke and Duchess of Calgary

Dr. Alphonse Mephesto's brother has never been seen, but it is revealed in the episode "Cartman's Mom is Still a Dirty Slut" that he attempts to shoot Mephesto every month on routine. In "201" we find out he's a Denver Broncos fan.

Elsie Thompson has never been seen, but is mentioned in "Bass to Mouth," in which Eavesdropper announces that Stan thinks Elsie has a nice butt crack as it was hanging out during PE.

Wendy's grandma appeared on a framed picture at the scene when Wendy's parents are talking to Wendy Testaburger in "Breast Cancer Show Ever". In the picture, she's standing next to Wendy. This is her only appearance in the show. In "Tom's Rhinoplasty", she was mentioned by Principal Victoria, who told Wendy that she just died.

Gordon Ramsay the chef, has been mentioned in "Crème Fraiche" when Randy Marsh was addicted to cooking, Cartman dressed up as Ramsay himself as one of the chefs in "Hell's Kitchen Nightmares Iron Top Chef Cafeteria Throwdown Ultimate Cookoff Challenge".

Helen Hunt is an Academy Award-winning American actress, best known for her role on Mad About You and in the movies As Good As It Gets and What Women Want.

In the episode "Cancelled", Eric Cartman thinks he is trapped inside Helen Hunt's ass when he wakes up in an alien pod. 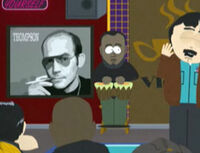 Hunter S. Thompson was a journalist known for creating Gonzo journalism, and as the author of Fear and Loathing in Las Vegas. A poster of Thompson decorates the wall of the Express Yourself cafe where Randy Marsh lets out some poetic stress in "With Apologies to Jesse Jackson". 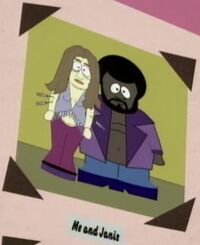 An image of Janis Joplin with Chef appeared in the episode "Chef Aid" in Chef's photo album.

Stan appeared dressed as Jefferson Davis in the episode, "The Red Badge of Gayness", in order to end the Civil War reenactment.

Jerry Garcia appeared briefly in the episode "Do the Handicapped Go to Hell?", as a resident of Hell.

Jessica Rose, also known as Lonelygirl15, appears briefly in the episode "Canada on Strike" as one of the internet celebrities waiting for their theoretical payments. She may or may not be deceased because she was not seen fighting or dead.

A cardboard cutout of Justin Timberlake appeared in the episode "AWESOM-O". The cutout was used as Eric Cartman's dancing partner as he sang the Mariah Carey song, "Touch My Body".

Kenny is referred to as Keanu Reeves in the episode "Best Friends Forever", by the Archangel Michael, because of his video game playing skills.

An image of L. Ron Hubbard appeared in the episode, "Trapped in the Closet". In the episode, Stan Marsh is believed to be the reincarnation of Hubbard.

Miley Cyrus is mentioned at the end of the episode "Britney's New Look". It is implied that she will be murdered in the same manner as Britney Spears for next years corn harvest.

Nicolas Cage was mentioned in the episode "Grey Dawn" to be a "mongoloid" by Mr. Garrison, not be confused with the Mongol, Genghis Khan.

An image of Orlando Bloom appeared on the wall of the list making committee's room, in the episode "The List".

Early in "Pinkeye", Liane Cartman sticks a poster of Richard Nixon on her front door, while singing about decorating the house with "creepy-crawly fiends." In "Chickenlover", the culprit molesting chickens is seen wearing a Nixon mask, before he's revealed as being the Book Mobile Driver.

Paula Poundstone is a stand-up comedian, who was once arrested on child abuse charges. In the episode, "Super Best Friends", Eric Cartman yells, "No, Paula Poundstone, leave me alone!" when Kyle wakes him up from a nightmare. 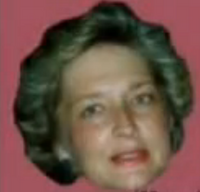 Phyllis Schlafly is a conservative, anti-feminist and anti-abortion activist known for her work in defeating the Equal Rights Amendment and who is still active. A picture of her, middle-aged, is on the front of "Get it Outa Me" abortion pill bottles while Kenny is at the drugstore in "Cartman Joins NAMBLA".

Ron Howard is mentioned in the episode "Ginger Kids". He was the only example of a famous ginger Cartman or any of the children in the Ginger Separatist Movement could think of.

An image of the Sex Pistols with Chef appeared in the episode "Chef Aid" in Chef's photo album.

Susan Boyle is a Scottish singer who became famous when she stunned Simon Cowell on the British show, the Britain's got Talent with her singing.

She was referenced in the episode "Fatbeard" by Ike Broflovski who said that he would 'vomit his balls out through his mouth' if he heard one more thing about her performance of "I Dreamed a Dream" from Les Misérables in Britain's Got Talent.

Tim Tebow is a professional American football player. He was the quarterback for the Denver Broncos and currently with the New York Jets. He has been mentioned in "Broadway Bro Down" and "Faith Hilling".

Tiny Tim appeared briefly in the South Park episode "Do the Handicapped Go to Hell?", as a resident of Hell.

Tom Hanks is an American actor most famous for his roles in the films Big, Turner & Hooch, Forrest Gump, Philadelphia, Toy Story , and Cast Away. In the episode "Chef's Chocolate Salty Balls", Eric Cartman remarks that Hanks "can't act his way out of a nutsack".

Tom Saltzman is first mentioned by Craig Tucker in "HUMANCENTiPAD", who states that Tom accuses Cartman of gluing a piece of glass to an iPad cover to fake he has an iPad. Cartman then tries to get the attention away from the fact by saying Tom Saltzman's dad is a drunk driver who ran over Joey Potts's dog. The age of the character is unknown.

Yvonne Finnerty appeared in the episode, "Tsst", as one of the nannies on the television program Nanny 911, along with Deborah Carroll and Stella Reid.

Retrieved from "https://southpark.fandom.com/wiki/List_of_Mentioned_Only_Characters?oldid=334737"
Community content is available under CC-BY-SA unless otherwise noted.