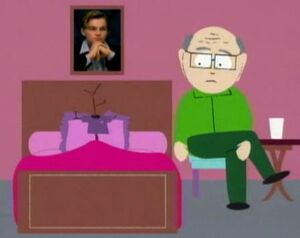 An image of Leonardo DiCaprio is hung over Mr. Twig's bed in the South Park episode, "Chef Aid".

In the episode, "Cow Days", Cartman suffers a head injury, which makes him believe that he was Vietnamese prostitute, named Ming-Li. After recovering the following day, he tells Stan and Kyle that he had a dream in which DiCaprio gave him a spanking for several hours. Immediately afterward, a limousine pulls up to Cartman and an unseen DiCaprio thanks him for the night before.

In the episode "Trapped in the Closet ", Stan said he didn't think Tom Cruise was as good an actor as Leonardo DiCaprio (but that he was still okay).

He also appeared in "Insheeption" when he went into Mr. Mackey's dream to save him, Stan Marsh, and Mr. Yeoman. He is voiced by Vernon Chatman in this episode.

Retrieved from "https://southpark.fandom.com/wiki/Leonardo_DiCaprio?oldid=117307"
Community content is available under CC-BY-SA unless otherwise noted.