Lennart Bedrager was an anti-troll activist and CEO of TrollTrace.com. He was the main antagonist of Season Twenty, first appearing in "The Damned".

After Freja Ollegard's death in "The Damned", a large community of Danes held a massive funeral for her, conducted by Lennart Bedrager. While delivering the eulogy for Ollegard, Bedrager vowed to destroy the troll responsible for her death.

In "Wieners Out", Bedrager and several other members of the Danish community held another vigil for Freja Ollegard. He silently lamented about the return of trolls in a new form, and vowed to "deal with them again."

With his service getting close to going online, Bedrager advertised a crowdfunding campaign to help boost popularity in "Douche and a Danish". Unbeknownst to him, however, the trolls were planning a massive troll in retaliation to the service. After the trolls successfully trolled Denmark, Bedrager took TrollTrace offline from social media. Luckily, Cartman and Heidi offered their assistance.

In "Fort Collins", TrollTrace.com is fully online and Lennart begins to target the eponymous city, causing chaos and mass hysteria.

Disguised as Ambassador Von Miller in "Oh, Jeez", Gerald Broflovski visits the TrollTrace.com headquarters in order to sabotage it. Bedrager, having captured several trolls under the same directives, is highly suspicious of him. He lets Gerald into a room to "look at the servers," securing him inside.

In "Members Only", having successfully captured the group of trolls, Bedrager announces his plan for the trolls and the world. He declares that when the servers go online and the service is made public, he is going to set the world into chaos and war. He believes that after the destruction of the world, a new world will rise full of happiness following Denmark's example. He is later reveals to Gerald in private that he isn't even Danish and is in fact a troll himself.

In "The End of Serialization as We Know It" he is confronted by Gerald Broflovski, who kicks Bedrager in the groin and tosses him off the walkway, where he falls to his death.

Lennart Bedrager wears black pants, a white shirt, a black tie, and black gloves. He also wears a long, black trench coat and a brown Tyrolean hat with a red feather brush and a green hatband. He has blond hair and graying, blond facial hair. 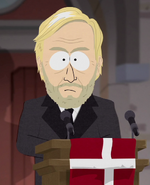 Holding a vigil for Freja Ollegard.

Lennart with other Danish people

Announcing TrollTrace.com as an internet service.