For other uses, see Kevin (Disambiguation).

Kevin McCormick is Kenny's older brother. He never appears without the rest of his family or Kenny, and very little is known about him. He only has a speaking role in three episodes: "Chickenlover", "Chickenpox", and "The Poor Kid". He is often seen in the background with his brother or his family, usually at church or at Kenny's numerous funerals.

Kevin has wild, messy light brown hair, with a bandage, scratch, dirt, and leaves on his face. Occasionally, his design changes inconsistently to where he has three shadowy patches on his face, which may either be bruises or dirt. He wears gray pants and a red button-up shirt and has a set of braces. For formal occasions, as seen in "Quintuplets 2000", he wears a light blue suit with a green tie with his hair combed back neatly. However, in "Sexual Healing" he wears a black suit with dark blue tie for Kenny's funeral.

In South Park: Post Covid, Kevin is seen as an adult man. Compared to his siblings, he has visibly aged the most. His hair is now greyed, there is a scar where his band-aid used to be, and his face has the green splotches he had in his design from early seasons. He now wears a stained red shirt similar to the one he wore during childhood. However, the sleeves are ripped off, and he is wearing a Colorado Avalanche sweater underneath. Kevin has noticeably also gained weight.

Kevin in "The Return of Chef".

Kevin with the rest of his family in "Best Friends Forever".

Kevin in "Sexual Healing" with a different hairstyle.

Kevin at his brother's funeral in "Sexual Healing". 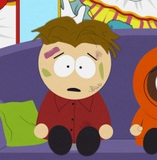 Kevin, Karen, and Kenny being taken away by the police.

Kevin, Karen, and Kenny with the Weatherheads and their foster children.

Kevin seen with his family in "Goobacks".

Kevin with his family in "The City Part of Town".

Kevin with Kenny and Karen in "Naughty Ninjas".

An adult Kevin in "South Park: Post Covid" at Kenny's wake, sitting next to Karen.

Kevin appears to be either slow, mentally handicapped, or a heavy drinker, as he speaks in a slow, repetitive slur when talking normally. Evidence of the latter is seen in "The Poor Kid", where his mother calls him and his father "drunk pieces of shit". However, he talks much more quickly and clearly when yelling and has a different voice in South Park: Phone Destroyer. Kevin seems to have some boisterous and violent tendencies, as shown when he joyfully laughs when his father is beaten up by his mother and Cartman in "Chickenlover" and when he attempts to strangle his father, initiating a fight. His aggressively exuberant behavior is shown again in his lines as Infiltrator Kevin, as he mimicks weapon noises when attacking and curses at the enemy player when attacked or defeated. However, Kevin has a bit more of a sarcastic side in Phone Destroyer, as he will remark with either surprise or exclaim that Sci-Fi sucks when defeated and calls Stuart's alias as Sizzler Stuart, "pretty lame." Kevin does not talk much; throughout the series, his voice has only been heard three times and he is usually quiet.

In addition, Kevin repeated a CPS's officer order to take a seat in a police car in a slurred tone. The reason for this is unknown, although a possibility is that it was some sort of defensive mechanism that Kevin uses.

Kevin also has a fixation with waffles, as he excitedly announces when his waffle has finished being toasted in "Chickenpox", orders the player to get their own waffle when asked for a selfie in South Park: The Fractured But Whole, and wears a waffle-maker as part of his Infiltrator Kevin costume.

Kevin is also implied to have a crass and juvenile sense of humor, as shown in South Park: The Fractured But Whole. When the New Kid farts on or near Kevin, he will respond with "Heh, nice." However, his animation shows him disgusted and angry.

Carol is Kevin McCormick's mother. They are never seen interacting one-on-one, although, judging from the pseudo-conversation they had in "The Poor Kid", their relationship seems to be a weak one, filled with fighting. His relationship with his mother is likely stronger than with his father.

His mother does seem to care about him, because in "Spookyfish", she tells Kenny off for not sharing the blanket with Kevin. She also expects Kevin to do the same for Kenny, as shown in "Chickenpox" when she tells Kevin to split his waffle with him.

It should also be noted that Kevin is the only McCormick child to share their mother's southern accent, although the accent has seemingly disappeared in his game appearances.

Stuart is Kevin McCormick's father. Judging from the events of "The Poor Kid", they do not have a good relationship. Their relationship also seems to be violent, likely when they are drunk, with Carol McCormick having to step in to prevent them from physically fighting each other. They seem to ignore each other, except when Stuart is drunk. However, when sober, the two still seem to not get along, as shown when Kevin calls his father's alias Sizzler Stuart "pretty lame." In addition in "The City Part of Town" when the McCormicks are all in the living room adjusting to their new situation, Kevin has a neutral expression on his face. This expression soon shifts to annoyed anger and concern when Stuart starts to yell at Karen after she requests ice cream from Sodosopa.

Kenny is Kevin's younger brother. The two are never seen interacting, so little is known about their relationship. They seem indifferent to each other's presence, completely ignoring each other. When seen together, it is usually with the rest of their family. Neither Kenny nor Kevin like sharing with one another. In "Spookyfish", Kenny tugs the blanket from him, and in "Chickenpox", Kevin has to share frozen waffles with Kenny, because of the lack of food. They seem to somewhat tolerate one another; in "Chickenlover", both were standing next to each other, giggling when their mom beat up their dad. In "The List", Kevin was extremely horrified when Kenny was shot by a stray bullet in front of him.

In "Best Friends Forever", Kevin is sitting next to Kenny during a rollercoaster ride at the amusement park. Later, he is seen at the hospital with his family, looking at Kenny in his 'tomato' state. The two can also be seen playing together in "Here Comes the Neighborhood".

Karen is Kevin's youngest sister. The two are never seen interacting, so little is known about their relationship. Kevin seems to either ignore her or stay distant from her, however, she seems to look for him for protection, hiding behind him in various instances. When Kevin is fighting with Stuart, the argument does scare Karen, causing her to break down and start crying. Unlike Kenny, Kevin is not as close to her. In "The City Part of Town", when Stuart starts yelling at Karen, Kevin merely responds with slight concern, although Kenny scowls and runs after her. However, he does seem annoyed and concerned when Mr. Adams tries to get Karen to stop crying in "The Poor Kid".

Kevin can be found eating a waffle with his weary mother in the Mccormick's kitchen. However he will shoo you away if you ask him for a selfie, saying "Get your own waffle!" A rare standby line of his is stating that he saw you on TV. Like most other characters he will respond if you punch or fart on him, although he seems to find the New Kid's flatulence humorous.