The Killer Clown
Pogo the Clown

For other uses, see John (Disambiguation).

He was given the task of picking up Satan's Ferrari Cake, along with Jeffrey Dahmer and Ted Bundy. The killers' antics parodied the slapstick violence of The Three Stooges films with murder. The trio renamed The Three Murderer's with Gacy being the role of "Curly" Bundy acting as "Moe" and Dahmer as "Larry".

Throughout the episode he murders four people, resulting in him being slapped by Ted Bundy each time. Unlike the other two, Gacy seemed to have been revived, although he is now blinded because Bundy ripped his eyes right out of his head.

Gacy is bloodthirsty and evil, being unable to control his homicidal urges. He also seems foolish and unintelligent.

He has short, gray hair and a black mustache. He is very overweight. He wears a light gray "dress" shirt and gray pants.

Gacy murdering an innocent, who offered to help him, Ted Bundy, and Jeffrey Dahmer with loading the Ferrari cake.

Gacy covered in cake and blood. 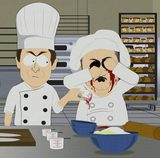 Gacy after having his eyes ripped out by Ted Bundy.