Jenny is a kindergartner who made her first appearance in the Season 4 episode "Trapper Keeper". She made several other appearances in later episodes, usually as a background character. For now the only episodes she has a speaking role are "Trapper Keeper" and "Tegridy Farms". 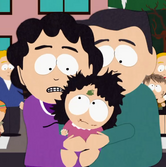 Jenny with her parents.
Add a photo to this gallery

Retrieved from "https://southpark.fandom.com/wiki/Jenny_(kindergartener)?oldid=386680"
Community content is available under CC-BY-SA unless otherwise noted.