Jenny is a kindergartner who made her first appearance in the Season Four episode, "Trapper Keeper". She made several other appearances in later episodes, usually as a background character. She speaks in "Trapper Keeper", "Proper Condom Use", and "Tegridy Farms". 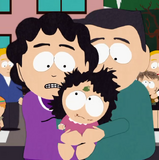 Jenny with her parents.