Jenkins, also known as 'the griefer', was the sole antagonist in the episode "Make Love, Not Warcraft". He has since appear on few other episodes, such as in a crowd scene in "Britney's New Look". He later reprised his role as a troll prominently during Season Twenty.

Jenkins is depicted as a stereotypical nerd who spends his time playing an online MMORPG called World of Warcraft. He has played to an such extent that even the game's developers and Game Managers can't kill him, as he has reached a level deemed impossible. He had once been made fun of in the game, so Jenkins decided to get revenge on people by killing any player he encountered.

After a couple of unsuccessful attacks against him, the boys finally manage to defeat him using the Sword of a Thousand Truths. He presumably stopped playing after being defeated by the boys.

After 10 seasons since his last prominent appearance, he returns again in "Wieners Out" where he is seen with other trolls at the secret troll meeting. The meeting resumes in "Douche and a Danish", and he is seen again. In "Fort Collins", he joins the troll party at the Broflovski Residence, but quickly leaves with the other trolls. In "Oh, Jeez", he is seen in a locked room captured by Lennart Bedrager and TrollTrace.com.

Jenkins appears to be extremely overweight. His obesity is also supported by his excessive consumption of junk food and energy drinks. He is mostly bald with matted, unkempt brown hair on the sides of his head. He wears a gray t-shirt with black trim and black sleeves.

He has a tattoo on the left side on his chest as shown in the episode "Not Funny". He has acne on his face, wears round framed glasses, and occasionally will have bits of food crumbs on his stomach. He also wears a wrist brace, most likely due to carpal tunnel syndrome, which would probably be brought on by his hand posture, poor health, poor diet, and lack of exercise.

His World of Warcraft character is mostly naked, having only yellow shorts, brown and green gloves, and tall purple and gold boots to wear. He wields a dagger and also wears an orange helmet. According to users who have played World of Warcraft, Jenkins' character wears the following in-game items:

However, in "Britney's New Look", he seems to have lost some weight.

He gained that weight back by the time he re-appeared in "Wieners Out". 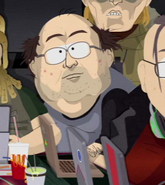 Jenkins at the Airport Hilton trolls conference in "Wieners Out".

Jenkins from behind at Gerald Broflovski's home in "Fort Collins".