For other uses, see Jason (Disambiguation).

Jason White is a student at South Park Elementary and a friend of Craig's Gang known for his love of sports, though he has rarely spoken. He is voiced by Trey Parker.

He was killed off in the Season Twenty-Three episode "Season Finale" after he was run over by a police car, but in "The Big Fix", he can be seen alive in multiple scenes, playing on the playground as well as at the school assembly.

He made his first major speaking appearance in "South Park is Gay!", seen with Craig's Gang when they wore matching outfits as metrosexuals, alongside Craig Tucker, Tolkien Black, and Tweek Tweak; he makes his only appearance in Mr. Garrison's classroom in this episode.

He was also part of the group who helped recover the "future telling device" in "Marjorine", waiting with Timmy outside the containment center for the rest of the boys to return.

He is also one of the members of the boys' class involved in trying to capture the leprechaun in "Imaginationland", openly expressing his surprise when they manage to capture it.

In "Breast Cancer Show Ever" and "Elementary School Musical" he is sitting with the main boys in the cafeteria and their extended friend group, including Craig, Tolkien and Jimmy. In the latter episode, he explains what High School Musical is and expresses disbelief at the kids' lack of familiarity with the fad.

He can still be seen as part of the boys' extended circle eating pizza with them in "Margaritaville" and at Cartman's viewing party in "Eat, Pray, Queef", in both appearances alongside the other five members of Craig's gang. After this season, he began to appear less often among the boys' extended group.

He was present at Cartman's sleepover in "The Last of the Meheecans", acting with DogPoo Petuski as one of Cartman's core Border Guards.

In "The Hobbit", he walked past Stan Marsh and Wendy Testaburger in the hallway at the same time she mentioned Jason having freckles.

His family was finally introduced in "Splatty Tomato", when his father Bob White and mother Mrs. White are seen comforting his sister Crystal White and visiting PC Principal to complain that the school is too liberal and causing his kids to be afraid of the President. When they summon their children, Jason appears and looks at the floor and does not speak throughout the scene. When his parents later try to free the President at the end of the episode and his family summons him, he similarly looks at the ground and does not speak. He appears submissive to his parents.

Jason was killed off in "Season Finale" while playing football with the other boys in the park, and rushing into the street to catch the ball as Eric Cartman tosses it, getting hit by a police car in the process, to the horror of his classmates. His family was seen holding a sparsely attended funeral where he was eulogized by Father Maxi, discussing his playful nature and love of sports, and his own father, who complained that nobody seemed to care that a 'White' was killed by police, and complaining that now there were 'less Whites'. Urged on by Cartman, claiming he had been close with Jason, the Whites take the opportunity to adopt another child, Alejandro White. Mrs. White compare them unfavorably, pointing out Jason never tried to rebel against their authority such as by making long-distance phone calls. They also cite Jason's death as a motivation to buy more marijuana from Tegridy Farms.

In "The Big Fix", Jason could be seen at school on the playground playing tether ball and in an assembly raising his hand to indicate he knew Tolkien's correct name, appearing to have been somehow revived. He is fully animated in both sequences, unlike previous oversights like Betsy Donovan, and was not removed from the uncensored cut of the episode.

Jason was known for his playful nature among the townspeople, and seemed well-liked among his classmates, frequently invited to larger gatherings or to play games. He participated in many of the other children's role-playing games, playing along under even Cartman's authority as a Border Patrol agent in the Texans vs. Mexicans game and dedicating himself to the role of an elven shopkeeper in the boys' fantasy role-playing game. He was especially known for his love of sports, however. He was known as a member of both the South Park Cows' basketball team as well as the football and soccer teams, and had a reputation for enjoying playing sports in his free time as well, joining the kids for games of football on the playground and at the park. He also expressed once that a football game would be less fun to watch if knowing the outcome in advance. At his funeral, Father Maxi observed it was his playful nature with sports that lead to his untimely death.

Jason seemed embarrassed or intimidated by his father's outbursts, remaining silent and often looking down or away from him, though he was evidently surprised when his father pulled out a weapon. He is never seen speaking in his parents' presence. He was also evidently obedient to their demands, as after his death, his mother remarks that he did not use his phone outside of designated phone hours. His family was later shown hitting their subsequently adopted child, Alejandro White for misbehaving, suggesting Jason's reluctance to speak and obedience may have been a result of similar abuse.

Jason's quiet nature stood in contrast to his parents, who were known for their outspoken nature among the other adults, and often seemed to prefer following the other students, like Craig Tucker, and seemed concerned about what was popular, expressing his surprise that the boys were unfamiliar with High School Musical and citing its popularity with their age group. He often spoke up when expressing disbelief or surprise, such as when the boys succeeded in capturing a leprechaun, or when Butters Stotch exposed himself at a volleyball game. He often appeared rather stoic or expressionless in serious situations however, even compared to other background characters, watching blankly when Kenny gets crushed to death by the Giant Reptilian Bird or when Snooki sinisterly appears behind Cartman during "It's a Jersey Thing", in which everyone appears to be concerned apart from him.

Cartman observed in his opinion that Jason "couldn't catch" and suggested that he had been clumsy, blaming this for his death being ran over by police officer's vehicle when he tried to catch a ball Cartman had thrown in the street, although this could be seen as avoiding blame for Jason's death considering Cartman was the one who threw it.

Jason has dark brown hair with noticeable sideburns and a high forehead with a receded hairline. He wears a purple jacket and a pair of blue jeans, which were originally dark gray. In "The Hobbit", Wendy mentions that he has freckles. His character is based on Jason McHugh, who was featured with Trey Parker and Matt Stone in Cannibal! The Musical and Orgazmo.

Jason's friendships were never well-defined in his appearances. He was most notably a member of Craig's Gang during the metrosexual fad in "South Park is Gay!", and was still seen alongside them in larger gatherings with the boys such in the cafeteria during the twelfth season such as "Elementary School Musical", eating pizza in "Margaritaville" at Cartman's viewing party in "Eat, Pray, Queef" and at a sleepover in "The Last of the Meheecans".

His closest friend may have been Tweek Tweak. Both boys appeared in Craig's Gang during the meterosexual fad, and then were no longer with them in "Good Times with Weapons", but continued to appear together. They were seen together most notably when they were invited together to a party at Bebe Stevens' home during the Stupid Spoiled Whore fad. They are also next to each other in "Marjorine", "Night of the Living Homeless" and "Imaginationland". He also may have been friendly with Tolkien outside the group, as they were both on the same Cows basketball team together. Tweek was noticeably more upset with Jason's death than their other classmates present.

Cartman once referred to himself as "pretty close" with Jason, and they seemed to be friendly. Jason was among the boys who helped him to trap Kyle at the nearby Sizzler during the Jersey invasion effort, where DogPoo Petuski and Bill Allen were also present. He and Dogpoo were also both invited to play Texans vs. Mexicans at Cartman's House, where they both served as Border Patrol agents for Cartman. Dogpoo was also present for Jason's death. He also played with Bill on the basketball team and appeared next to him in "The Hobbit" when Wendy discussed the boys' flaws. He and Bill both joined Tweek in the PlayStation 4 Army in "Black Friday".

He was also often seen nearby or talking with Kevin Stoley, implying a possible friendship, such as at Cartman's House in "Marjorine" or during the volleyball game in "Wieners Out".

Staring in "Butters' Bottom Bitch", he was often seen sitting by Scott Malkinson, Tommy Turner, Daniel Tanner, and a few unidentified background characters in the cafeteria.

Jason plays a minor role in the game as a member of the Drow Elf faction, tending the armory at the Elven Kingdom and acting as the faction's merchant. You have to buy equipment from him to befriend him. This is one of the few times he speaks, and the only time you interact with him in the game, though he appears in the cutscenes throughout.

He can be found in the Raisins restaurant and The New Kid can get a selfie with him if they have at least one active brutalist ability. 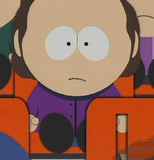 Jason as one of the 20 boys selected to be The Boys' new friend in "Professor Chaos".

Jason receiving a rose after making it to the second round.

Jason being eliminated as a candidate in the third round. 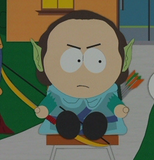 Jason angry at Kevin Stoley in "The Return of the Fellowship of the Ring to the Two Towers". 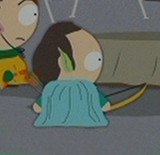 Jason, as Legolas, from behind.

Jason as part of Craig Tucker's 'metrogang' in "South Park is Gay!"

Jason walking past the girls who find him and Tweek Tweak attractive in "Stupid Spoiled Whore Video Playset".

Jason building the room for the 'future telling device' in "Marjorine".

Jason arguing with the other boys about who gets to use the device first. 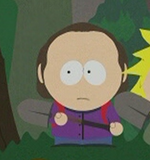 Jason hunting a leprechaun in "Imaginationland".

Jason about to see how he ranks in attractiveness, according to the girls, in "The List".

Jason as a basketball player in "Elementary School Musical". 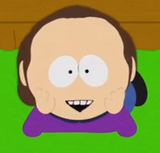 Jason on the floor about to watch Terrance and Phillip.

Jason meeting with Cartman and other children in "It's a Jersey Thing".

Jason from the side in "It's a Jersey Thing".

Jason alongside Tweek and Kevin.

Jason and the rest of the boys outside the containment center in "Marjorine".

Jason and the other boys in "Douche and a Danish".

Sitting at lunch with other children.