Jake (The Stick of Truth)

For the 4th grader, see Jake.

Jake is Monica Ryland's boyfriend who appears only as a Boss in South Park: The Stick of Truth.

Bebe thinks Monica was a two-faced bitch so she had New Kid pretend to be her long-distance boyfriend to see if Monica hits on him. As New Kid talks to Monica, immediately Bebe and the other girls show up and bring Jake. He will attack New Kid for thinking he has done something bad for Monica, but is easily defeated. During the fight Jake is called "Monica's Boyfriend".

Jake wears a white shirt under a blue jacket with a drawing of a soccer ball on the right side with two white stripes underneath, black shorts with white stripes and black shoes. Jake has brown hair and is bigger than a 4th grader.

Jake about to attack New Kid. 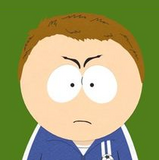