Isla is a female fourth-grade student at South Park Elementary. She first appears in the Season Nine episode, "Marjorine".

Isla can be seen watching the Jonas Brothers perform live in "The Ring" and later be she can be seen sitting with the popular girls' clique in "Insheeption". She appears again seasons later and plays a much more significant role in the Season Twenty-One episode, "Doubling Down", where she and the other girls take Heidi out to dinner to celebrate her break up with Eric Cartman, but later begin to tease her and make her feel guilty. She plays another major role in the following episode, "Moss Piglets", where she is portrayed as one of the victims of Heidi's bullying.

Isla has wavy, shoulder-length dark brown hair with a lock of it hanging down the center of her forehead, identical to Kal's. She wears a red sweater with green pants.

When dressed for bed, Isla wears a red top with white lace trim and red pants.

In the episode, "Doubling Down", Isla imitates Cartman to mock him and his relationship with Heidi and does so near perfectly. This suggests that like the other girls, Isla may have a personal vendetta against Cartman, and speaks of him rather harshly.

In "Moss Piglets", another, more prominent aspect of Isla's personality is shown. She becomes deathly afraid of Heidi since the latter's transformation, and speaks of her very carefully to avoid conversing with her. She is shown to be timid, perturbed, and silences and submits herself easily to whomever she feels intimidated. Her sudden shift of personality from witty and facetious to delicate and fearful between "Doubling Down" and "Moss Piglets" could be directly influenced by Heidi's mistreatment and imminent joy of targeting her.

In "Skank Hunt", Isla is seen breaking up with Brimmy toward the end of the episode.

Isla in her pajamas in "Marjorine".

Isla playing with a Cootie Catcher in "Marjorine".

Isla in "Doubling Down".

Isla with Heidi Turner, Annie Knitts, and Bebe Stevens in "Doubling Down". 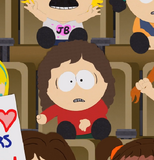 Isla at the Jonas Brothers' Concert