Hugh is a South Park character based and drawn on the real-life person with the same name who had won the Omaze Campaign for "NEXT for AUTISM"[1]. He first appear in the Season Twenty-Two episode, "Dead Kids".

In "Dead Kids", he was seen as one of the townsfolk surprising Sharon Marsh at South Park Elementary.

In "Nobody Got Cereal?", he hosts the symposium titled "When should I start to worry?".

Hugh wears a buttoned shirt, with long trousers. He has brown eyebrows and a brown goatee. He also wears glasses and is bald. 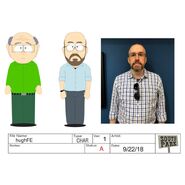 Hugh seen with the other townsfolk surprising Sharon