Henrietta Biggle is a 4th grader who first appears in the Season Seven episode, "Raisins". She is the main female member of the Goth Kids and was the first goth to have their name revealed. She speaks with a soft Valley Girl accent.

It is revealed in "Coon vs. Coon & Friends" that Bradley Biggle is her brother, though not by blood because as the story progresses we learn that he is actually an alien. During the events of "Goth Kids 3: Dawn of the Posers", Henrietta's parents send her to a camp attempting to improve her attitude.

Henrietta has engaged in numerous criminal offenses, mainly along with the other Goth Kids.

She plays the keyboard in the Goth Kids' band. Their only known song is "Talent Shows are for Fags" played ironically at the South Park Elementary Talent Show in the episode "Erection Day".

She can also drive well, as seen in "The Ungroundable" when she steals her mother's car.

Henrietta is overweight and has medium-length, spiky straight hair that is parted in the center. She has a slanted posture, to hide her stomach. She wears mascara on her eyelashes, round loops on the sides of her eyes, purple lipstick, and black pointed nails. She wears a black dress with a sheer illusion neckline and bat wing-like edges, a necklace with the cross on it, black finger-less gloves, black socks, and black Mary-Janes. She does not wear eyeliner, unlike the other goth kids. Oftentimes, she holds a cigarette holder whenever she wants to smoke.

When the vampire trend slowly grows, she dressed up as a conformist to not confuse others with them being vampires. She wears a plain pink, buttoned-up uniform and light-grey shorts.

When a camp turned her "emo", she wore her hair parted on the side, grew her bangs longer, and dyed the ends of her hair pink, sporting a green headband as well. She wore running black mascara, pink lipstick, pink striped gloves, and a bat on her necklace instead of a cross.

In South Park: The Stick of Truth, during the quest Attack the School, a bronze helmet with tiny wings on its sides, a bronze breastplate, and a red cape are added to her regular outfit.

In South Park: Post Covid, Henrietta appears as an adult woman. She is still the most overweight of the goth kids and still has her cross necklace. However, instead of wearing her typical black dress, Henrietta sports a striped purple and pink shirt, black pants, and her hair has been dyed completely blue.

In "Pajama Day", she is seen wearing a red and black robe with red bat decor and an eye mask of a purple bat. 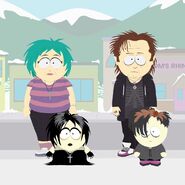 An official image of Henrietta and her adult self, along with Pete Thelman.

Henrietta is also shown to had a bad relationship with her father. His only appearance is in "Goth Kids 3: Dawn of the Posers" where he is shown to be somewhat stricter than his wife.

Henrietta finds her little brother annoying and Bradley, in return, is scared of her. Despite relying on her to keep him company, Bradley would like to gain the upper hand on his sister, which he eventually does in "Coon vs. Coon & Friends", where he mimicked her after discovering his powers. He returned to their home only to call her fat and flip her off, suggesting an utter dislike for her.

Henrietta is always seen inside her own bedroom of her house, also hanging out alongside the Goth Kids boys. A selfie can be taken with her after completing the quest to initiate a black magic spell sourced online by Michael. Apart from that, she plays no further role in the storyline until From Dusk till Casa Bonita.

In From Dusk till Casa Bonita Henrietta plays a more significant role, joining up with The New Kid to take down the Vampire Kids at the Casa Bonita eatery, where she is seen having a meal with her parents; she will be unlocked as a Combat Buddy in the process, also she will be included as a party member for the main storyline in past and future save games. If Henrietta, despite not showing up in the main game cut scenes, is picked anytime for combat, she will have a dialogue based on the events where the battles occur. This also alludes to character banter between other superheroes rather than just The Coon and Mysterion. However, while she does comment on other characters, only The Coon, Mysterion, and Mintberry Crunch will directly talk to her and make comments about her abilities.

Henrietta is only available in the Dusk to Casa Bonita DLC.

Henrietta is a ranged combat buddy, having abilities that cover a wide range. She acts as a great party backer, as her abilities provide advantageous buffs to party members or even herself.

Henrietta's Satanic Seal ability is one of the best support abilities around, as it gives an attack boost, provides protection, and removing any status effects to a targeted member or even herself, providing a massive edge in combat. Her Baleful Blessing ability also provides great support, providing heal to a targeted member or even herself, and a lifesteal attack for further healing if any enemies are within range.

Henrietta's Ultimate Ability, Black Mass can be considered one of the most devastating Ultimate abilities among all the party members that can be picked; it is a lifesteal attack that applies damage to all enemies on the battlefield while healing all allies in the process.

The downside to her is that she has one of the lowest health bars of any ally, so she is far more likely to be picked off by powerful enemies such as Morgan Freeman fairly quickly. And in trade for her buffing abilities, she lacks the ability to do much damage as two of her abilities do not deal any direct damage at all.

Appears as a neutral card in-game along with the other Goth Kids.