Gordon Stoltski was a third grader who used to read the morning announcements for South Park Elementary. He first appeared in the Season Nine episode, "Ginger Kids", and made his final appearance in the Season Thirteen episode, "Dances with Smurfs".

Gordon was one of the discriminated children in "Ginger Kids". When Eric Cartman was tricked into believing he too was ginger, he recruited Gordon and many other ginger children to participate in a pro-ginger rally.

In "Fatbeard", Eric Cartman formed a pirate crew, calling for all the children interested to join him. In his basement, Butters Stotch, Kevin Stoley, Clyde Donovan, Ike Broflovski, and Gordon all meet, hoping to become pirates. Once he enters the room, Cartman rejects Gordon for being ginger.

In "Dances with Smurfs", a man believing Gordon was a 40-year-old truck driver, who was having an affair with his wife, barged into the school and killed a faculty member. After an unsuccessful attempt at convincing the assailant that he was a 3rd Grader, Gordon was shot and killed. The man then committed suicide, shortly after noting that all parties involved were now deceased.

Gordon is a typical ginger with pale white skin, freckles around his eyes, exaggerated orange lips, and red curly hair. He wears a short-sleeved shirt with red details, written "Robot Warriors" on it. Dark blue pants and black shoes. He is a little taller than most children.

In "Fatbeard", Gordon's pirate costume consisted of a black mustache, a red and gray shirt with a picture of a black skull attached, a brown belt with a gray toy sword on the right, black pants with white socks on top and brown shoes.

His memorial photograph showed him wearing a white shirt with a red tie with dark stripes under a brown suit.

Gordon Stoltski dressed as a Pirate in "Fatbeard" 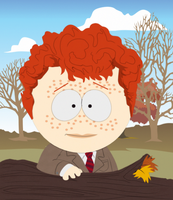 Gordon in place of the Hallway Monitor Boss in a beta version of South Park: The Stick of Truth.