Family Guy is an animated television show on the FOX network. The show has been criticized by Trey Parker and Matt Stone in the episodes, Cartoon Wars Part I and Cartoon Wars Part II for having jokes that have nothing to do with the plot of the episode. The second episode revealed that Family Guy is written by a group of manatees, that pick up balls that have words etched on them. One ball has a a build up, and the second ends the joke. If a ball is removed from the tank, the manatees will stop their work. 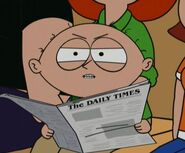 Brian Griffin
Add a photo to this gallery
Retrieved from "https://southpark.fandom.com/wiki/Family_Guy?oldid=53938"
Community content is available under CC-BY-SA unless otherwise noted.