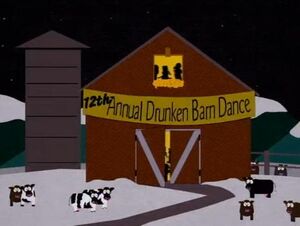 The Drunken Barn Dance is an annual event in the town of South Park. It was first mentioned in the Season One episode "Cartman's Mom is a Dirty Slut".

The Drunken Barn Dance is an annual event in which all the townspeople of South Park get completely drunk, dance and have sex in the haystacks.

During the 12th Annual Drunken Barn Dance, Liane Cartman did just that. While getting completely wasted off assorted alcoholic drinks, Liane went on to have sex with a large percentage of both the male and female population of South Park. Amongst those she had sex with were Chief Running Water, Chef, Herbert Garrison, Dr. Alphonse Mephesto, Kevin, Officer Barbrady, Jimbo Kern, Ned Gerblansky, Gerald Broflovski, and the entire Denver Broncos team. It is revealed way later in "201" that the Right Tackle of the team at the time, Jack Tenorman, managed to impregnate Liane with her son, Eric Cartman.

Retrieved from "https://southpark.fandom.com/wiki/Drunken_Barn_Dance?oldid=366592"
Community content is available under CC-BY-SA unless otherwise noted.