DogPoo Petuski, voiced by Trey Parker, is a student at South Park Elementary that's always seen covered in dirt. He was mainly a filler in the classroom throughout the first three seasons, but since "Fourth Grade", he only appears occasionally in large groups or in the playground, gymnasium, or hallway.

Originally in "The Unaired Pilot", he was seen rolling around in what appears to be a puddle of mud or dog feces during recess with the prototype Tolkien watching him. Later, in "The Wacky Molestation Adventure", he, along with Francis, is one of Mayor Cartman's Assistants.

He had his first speaking role in "Professor Chaos". He was a possible replacement for Kenny and lamented his status as a supporting character, but didn't survive the first cut. Cartman described him as "more of a prop". He reappeared in "It's a Jersey Thing" as part of Cartman's entourage against Kyle. He is the only member besides Butters to have lines, yelling "GET IT OFF OF ME!" when Snooki rapes him. He makes two appearances in Season Fifteen. First is in "The Last of the Meheecans" when he stays with the boys indoors. He re-appears in "1%" and is seen behind Wendy during P.E. His last name was revealed to be Petuski in "T.M.I.".

One of DogPoo's main features is his dirt and mess all over him, he might do this on purpose though, as he rolls around in mud/dog poo in The Unaired Pilot. He has dirt in his hair, clothes, and on his face. He also has a scab on his cheek. His parents look normal and clean, which means DogPoo probably just likes being dirty.

He has messy, faded brown hair, and wears a messy brown jacket with dark green trousers or track pants. He has a mark on the right side of his jaw that may be a large mole, scab, or dirt stain, similar to Pig-Pen from Peanuts, or actual dog poo. On the left side of his jaw, he has a scratch. His relatively deep voice has a slight Canadian/English twang to it in "Professor Chaos".

Despite being covered in dirt and having a messy appearance, DogPoo is quite sophisticated, speaking in an accent with a slight Canadian/English twang to it. The other kids and adults treat him like everyone else, not even pointing out all his dirt. He also is a bit of a follower, blindly following Cartman's orders in "It's a Jersey Thing". He is also self-aware of his minor appearance and little interaction with the boys, saying "I've been around these guys for like, five years, and never got to say or do anything."

DogPoo can be seen in the Elven Kingdom, where he sends the player on a quest to destroy some Kupa Keep banners placed in the Elven Territory.

DogPoo can be found near the trash at the basketball court, and eagerly accepts The New Kid as a friend.

"I've been hanging around these guys for like five years and I never get to say or do anything." ("Professor Chaos").

DogPoo being raped by Snooki in "It's a Jersey Thing".

Dogpoo and his family in "The Wacky Molestation Adventure". 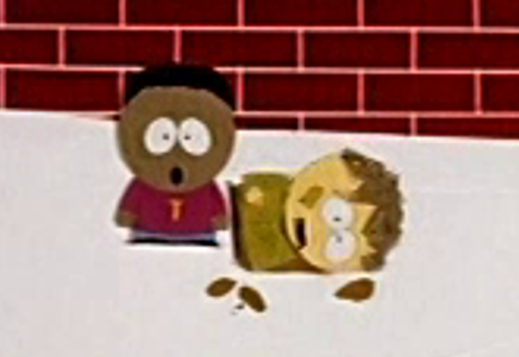 Dogpoo rolling in the mud in The Unaired Pilot.